Directed by Hong Suk Gu and written by Yoon Kyung Ah, last week’s episode showcased the main love line coming to a standstill. However, it appears from new preview stills that the secondary love story between Chae Seo Jin and Lee Jong Hyun is moving full speed ahead.

In the stills, Lee Jong Hyun wipes away Chae Seo Jin’s tears and comforts her by holding her in his arms. Lee Jong Hyun’s character is typically a little rough and cool, so it’s interesting to see him act gently and warmly with Chae Seo Jin in this tense situation. 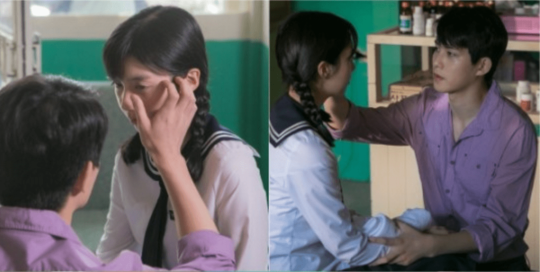 In last week’s episode, Chae Seo Jin had been waiting for her father, who had not returned home and couldn’t be contacted. When she came home from school, she discovered her house had been ransacked and signs of blood on the floor. Her father’s student had also vanished and the first person she turned to was Lee Jong Hyun. Lee Jong Hyun searched the entire neighborhood at her request but was unable to find any trace of her father.

“Girls’ Generation 1979” is set in Daegu in the late 1970s and tells the story of high school girls dealing with love and friendship. Episode 5 is slated to air on September 25 at 10 p.m. KST.