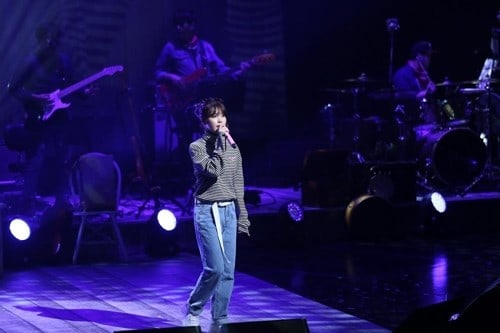 IU recently personally explained to fans why her new remake album will not include a previously planned cover of Kim Kwang Seok’s “With the Heart to Forget You.”

Previously, IU and her agency announced that the physical release of her album would be delayed until October. The digital version, released on September 22, did not contain the Kim Kwang Seok cover and many people speculated that the physical version’s delay was also due to this removal. The late Kim Kwang Seok has been in the news lately after recent revelations came to light about his daughter’s death.

On September 24, IU held a fan meeting celebrating her 9th debut anniversary at the Samsung Hall at Ewha University. At the fan meeting, she performed the cover of “With the Heart to Forget You” and showed a music video with actor Park Jung Min. Afterwards, she addressed the above speculations.

“In April, this song was one of the first I picked for ‘Flower Bookmark 2’,” she said. “In the last ‘Flower Bookmark’ album, I included the song ‘Flower.’ I’ve been a fan of the late Kim Kwang Seok for a long time and I wanted to include his song in this one as well.”

She continued, “However, after reading the recent news with interest and thinking it over for a long time, I decided not to include the song in this album. I thought it would be hard to treat this song as just a song, and people might feel emotions that are unrelated to the song while listening to it and feel uncomfortable.”

IU also apologized for the delay of her physical album to accommodate this change. “It’s a song I cherished a lot so it’s even more regretful. I want to officially release this song in better times, when everyone can enjoy it with a happy heart.”

*A previous version of this article incorrectly referred to the remake album as a repackaged album.

IU
Kim Kwang Seok
How does this article make you feel?