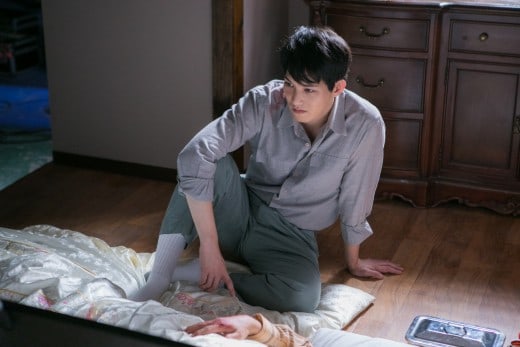 In the drama, Lee Jong Hyun plays Young Choon, a gruff young man with “tsundere” qualities who is actually more considerate than he looks. Recently, in the drama, he started a love line with Chae Seo Jin who plays Hye Joo, the 1979 version of a mom’s friend’s daughter.

Lee Jong Hyun described his character as “a real man from Gyeongsang Province.” He added, “Actually, Young Choon and I aren’t similar at all. We’re totally polar opposites.” When talking about how Young Choon acts cold on the outside but cares for Hye Joo (who has a one-sided crush on him) more than anyone else, Lee Jong Hyun explained, “I wanted to deliver that era’s pure love and heart-fluttering feelings to the viewers.”

Lee Jong Hyun, who is originally from Busan, showed joy about playing a character who talks with a dialect. He said, “I feel so refreshed. I really wanted to [speak in a dialect] all this time. I hope I can do it more in the future.”

“Girls’ Generation 1979” is a drama set in Daegu in the late 1970s and tells the nostalgic story of high school girls dealing with love and friendship. It airs every Monday and Tuesday at 10 p.m. KST.

You can watch episodes through the link below!