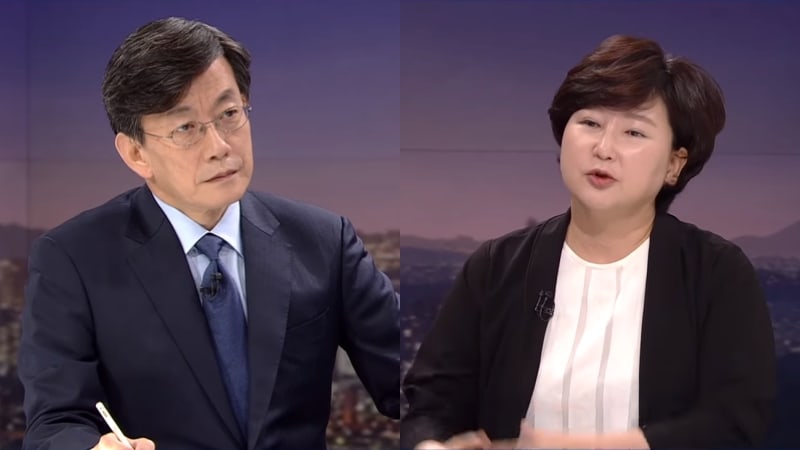 Kim Kwang Seok’s wife Seo Hae Soon has now talked about the comments she made after the singer’s death.

On September 25, Seo Hae Soon had an interview with anchor Sohn Suk Hee on JTBC’s “Newsroom” regarding the recent controversy centered around her daughter’s death and suspicions about her involvement.

Questions about Kim Kwang Seok’s death in 1996 have also arisen after a documentary was released by director Lee Sang Ho, in which it is suggested that he was murdered instead of having committed suicide.

During the “Newsroom” interview, Sohn Suk Hee pointed out that Seo Hae Soon had said at the time of Kim Kwang Seok’s death that he had died “after getting drunk and joking around.”

When questioned about this comment, Seo Hae Soon replied, “I was 29 years old. I said it was like a joke because that happened to my husband and I didn’t know how it happened, and that got misinterpreted.” She added that she had been getting called here and there at the time. She had said it was confusing and Kim Kwang Seok had gone like a dream, which got distorted as the words spread.

Sohn Suk Hee pointed out, “No, you said it several times. Then later you said [Kim Kwang Seok] had committed suicide.” Seo Hae Soon, however, answered that it was 20 years ago and she didn’t remember.

Sohn Suk Hee also brought up unanswered questions surrounding Kim Kwang Seok’s death. When he said there are speculations that Kim Kwang Seok was killed, Seo Hae Soon replied, “I’ve met people as I’m in the album distribution business, but nobody has said that.”

Seo Hae Soon continued, “At the time, my husband was talking about this and that after meeting someone and having a beer. I went into my room and was sleeping, and then I saw that he wasn’t there. I went looking for him and saw Kim Kwang Seok leaning on the staircase.” She added that she even performed first aid because she thought he was still alive. “I don’t think I took 50 minutes [to call the ambulance],” she said.

While Seo Hae Soon continues to plead innocence over her husband and daughter’s death, the prosecution has started a re-investigation of the case into the death of their daughter.