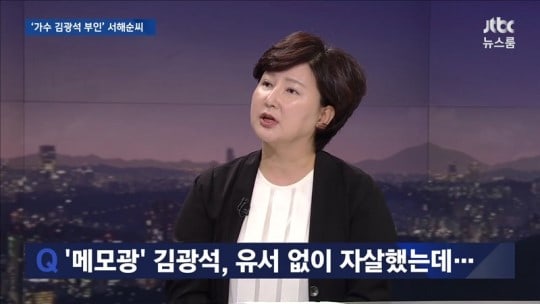 There has been a lot of controversy surrounding Kim Kwang Seok’s daughter Kim Seo Yeon’s death which has also made suspicions on the late singer’s suicide resurface. On the September 25 broadcast of JTBC’s “Newsroom,” Kim Kwang Seok’s wife Seo Hae Soon made an appearance. During the interview, she talked about the comments she made after her husband’s death and about why she kept her daughter’s death quiet for 10 years. On September 26, Kim Kwang Seok’s family commented on her appearance on the show through their lawyer Kim Sung Hoon.

Kim Sung Hoon made an appearance on CBS radio program “Kim Hyun Jung’s News Show” and stated, “We find it utterly unacceptable that Seo Hae Soon kept her daughter’s death quiet for 10 years and used the excuse that she was on bad terms with her in-laws.”

The lawyer also brought up the possibility that Seo Yeon’s cause of death might have not been pneumonia. He spoke about the contradictions concerning what was said regarding the cause of death and remarked, “Looking at the evidence reported by the investigative agency, Seo Yeon was almost on her deathbed when she received hospital treatment. At first, it was said that she had passed during treatment. Then when assemblyman Ahn Min Seok went to confirm, it was said that she had already passed away when she arrived at the hospital.”

Finally, Kim Sung Hoon stated that Seo Hae Soon’s interview was what the family had expected, as suspicions [about her] had risen. He concluded, “An average family’s child died due to acute pneumonia. The investigative team has asked us to confirm if there was any negligence, and we are going to comply to the fullest extent and accept the results.”