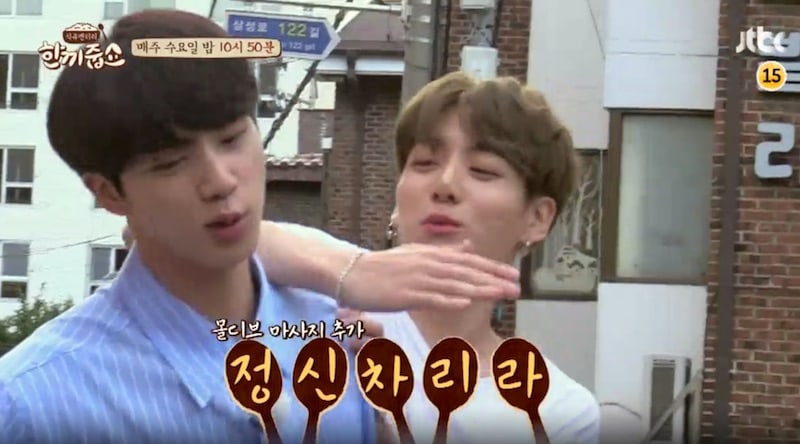 BTS’s Jin and Jungkook will be showing off their chemistry on the upcoming episode of JTBC’s “Let Eat Dinner Together.”

The pair joins MCs Lee Kyung Kyu and Kang Ho Dong as they look for families to share dinner with in Samseongdong, Seoul.

Upon seeing a doorbell with a fingerprint scanner, Lee Kyung Kyu says, “It’s my first time seeing something like this.” Jin smiles and comments, “Our dormitory is also fingerprint style. It’s a generation gap.”

Later, Lee Kyung Kyu is in front of a different home and says, “You guys need to ring this house’s bell later.” However, Jin shocks everyone as he immediately rings the doorbell instead of waiting for his turn. Everyone freezes and Kang Ho Dong says, “You need to apologize.”

Fortunately, no one answers the doorbell as it appears as though no one is home. Jungkook then jokes, “If you’re five years older than me you should behave more smartly.” 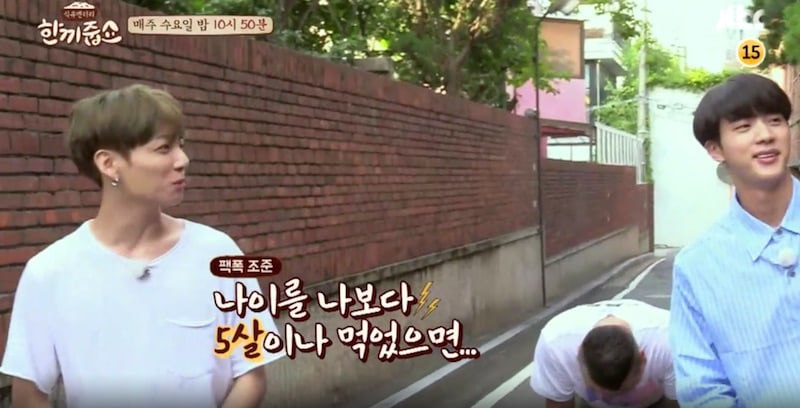 Lee Kyung Kyu then asks, “What is the age difference between you two?” to which Jin answers, “I’m five years older.”

The eldest BTS member then reveals, “There’s choreography that hasn’t been revealed yet but when the members gather for a formation, Jungkook stands behind me. At that moment he hits the back of my neck. Our dance teacher was stunned and laughed.”

Jungkook laughs and explains, “The back of Jin’s neck is soft and perfect for hitting.”

You can watch more adorable banter between the eldest and youngest members of BTS when the episode airs on September 27 at 10:50 p.m. KST.