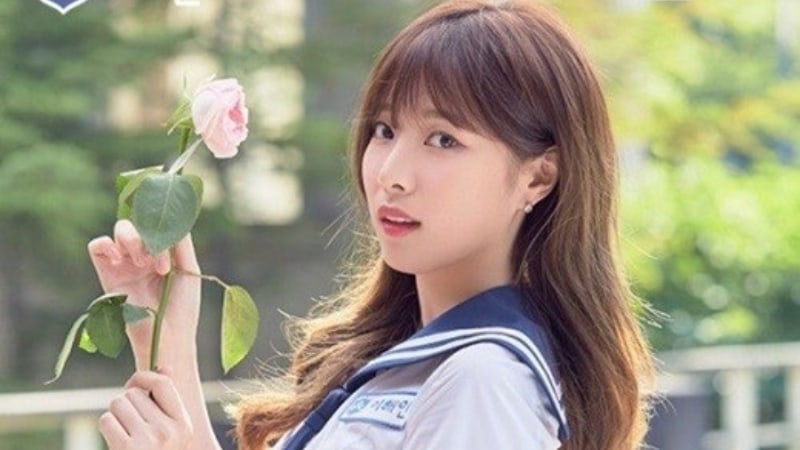 Idol trainee Lee Hae In wrote a heartfelt letter to fans following the announcement of which nine trainees from “Idol School” would be making their debut together.

On September 29, Lee Hae In posted a picture of the letter she wrote to her future self in 10 weeks and wrote a letter to fans. She had not made it to the final nine debut members on “Idol School” earlier on the same day. Many were sad to see her go as she was one of the strongest contestants on the program. Lee Hae In had participated in the first season of “Produce 101” in the past as well, but had narrowly missed the final cut.

“Thank you for waiting and sorry to make you wait once again,” Lee Hae In began her letter. “I learned and felt many things during these times.” She said that more than anything, she was so happy to have met all of the teachers, staff, and friends on “Idol School.” She gave her thanks to the production staff and listed people she had worked with whom she was grateful for.

“It was great to perform the last song in front of my parents, close friends, and fans, and I was happy to do a song about my dreams for the finale,” Lee Hae In continued. “I’d like to thank the composer of ‘MAGICAL.'” To her team members, she wrote, “It’s okay even if it’s not a path filled with flowers; let’s walk together.”

Lee Hae In also showed her determination towards her dream. She wrote, “I committed sincerely and desperately with no regrets and tried my best. So I’ll recharge myself and start running again. Please show lots of love for fromis_, my friends from ‘Idol School’ who will debut soon.”

She concluded her letter with, “It was a happy dream, just like what I had written that letter before I enrolled in the school.” Lee Hae In also added a little P.S. and thanked her friends who came to see her final stage saying, “I love you. Because I have you, I’m not afraid.”

“Idol School” revealed which students will be making their debut during its last episode on September 29. Lee Hae In’s final ranking was 11. The nine members who were chosen as the final members will be debuting under the name “fromis_.”

idol school
Lee Hae In
How does this article make you feel?