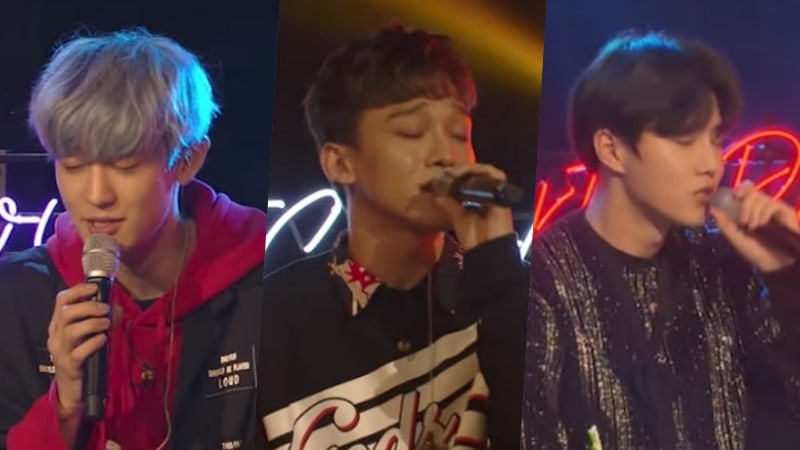 EXO members were the guests on the October 1 broadcast of SBS’s “JYP’s Party People.”

After performing some of their hits, they conversed with Park Jin Young about music and life. Park Jin Young asked Suho what makes him feel better when he is tired. Suho responded, “For me, I travel often. I want to be free and many people recognize me, so I try to go to foreign countries outside of Korea. I also talk with the members, watch movies, and listen to music.”

Then, he chose Kim Jo Han’s “I Want To Fall In Love” as the song that gives him strength for its relatable lyrics. When Park Jin Young asked Suho to sing the song, he was shy but immediately immersed himself into his own rendition of the ballad.

EXO also talked about being in their sixth year since debut. Chanyeol commented about what drives him and being thankful for the fans’ love.

Chanyeol chose to sing Jung Joon Il’s “Hug Me” as a thank you to fans, and he also showed off a cover of Radiohead’s “Creep.”

Chen revealed that his favorite song is Maroon 5’s “Sunday Morning” and crooned the pop song for fans. After listening to Chen’s performance in awe, Park Jin Young commented, “Oh wow this is really nice. [This song] really shows you’re a great singer.”

Watch the full episode of EXO on “JYP’s Party People” below!