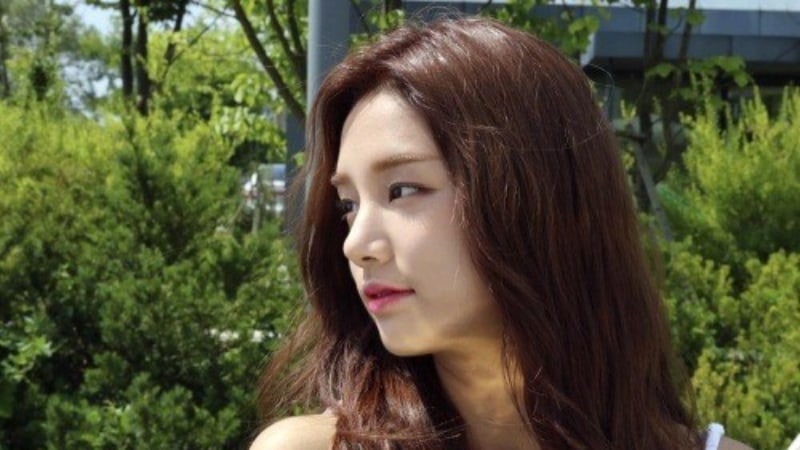 LABOUM’s Solbin recently sat down to talk about her career in acting and shared her future goals.

The interview began with questions about her position as an MC for “Music Bank.” When asked how she felt when she first got the job, Solbin replied, “I didn’t believe it at first. As it was a position I was grateful to simply audition for, I didn’t have any expectations at all. But when I did get the position, I was very grateful.” Before auditioning, she had written down and memorized all the scripts of the previous MCs, Park Bo Gum and Red Velvet’s Irene.

Solbin went on to talk about actor Lee Seo Won, her partner MC on “Music Bank. “He is a very kind friend,” she said. “Not only is he a good partner, he’s also a friend who says a lot of encouraging things. He’s a partner I’m grateful for as he tries to lift my mood by complimenting me a lot.”

Solbin also shared her thoughts on her career in acting. According to her, “Solomon’s Perjury,” the first drama she ever appeared in, was the most unforgettable. This was because it was filmed during the cold winter and the cast had a hard time together. “It’s a drama I learned a lot from,” Solbin explained. She had become good friends with the cast, still keeping in touch with them.

On the other hand, “Into the World Again” was a case where Solbin learned a lot from the director, the cast members, and the staff as they cared for her even though she didn’t get to go on set very often. Lee Yeon Hee took care of her and helped her a lot, she revealed.

Acting is fun for Solbin because she gets to express someone else’s life while communicating with directors and other cast members on the set, she said. “I think the biggest charm of acting is that you can learn and express feelings that you haven’t felt,” Solbin explained. She was happy and grateful for the opportunity to act as it was such an attractive job for her.

Solbin continued to share her future goals as an actress. “I want to try romantic comedies like Seo Hyun Jin or Jung Yoo Mi,” she said. “I want to try playing the role of a lovable, bright, and bold girl or a cool city lady. I also want to try the character of a career woman and an immature, youngest girl in the house.”

The actress also mentioned her goals as a LABOUM member. Solbin said the biggest strength of LABOUM was that they had the ability to pull off any concepts. “I want to be No. 1 on the music charts as LABOUM, have concerts, go to other countries and communicate with our foreign fans, and do a reality show in another country,” she said. “I have so many things I want to do as LABOUM. I want to try them one by one with the members.”

Solbin has acted in JTBC’s “Solomon’s Perjury,” SBS’s “Into the World Again,” and is set to appear on OCN’s upcoming drama “Meloholic” with TVXQ’s Yunho.

LABOUM
Solbin
How does this article make you feel?