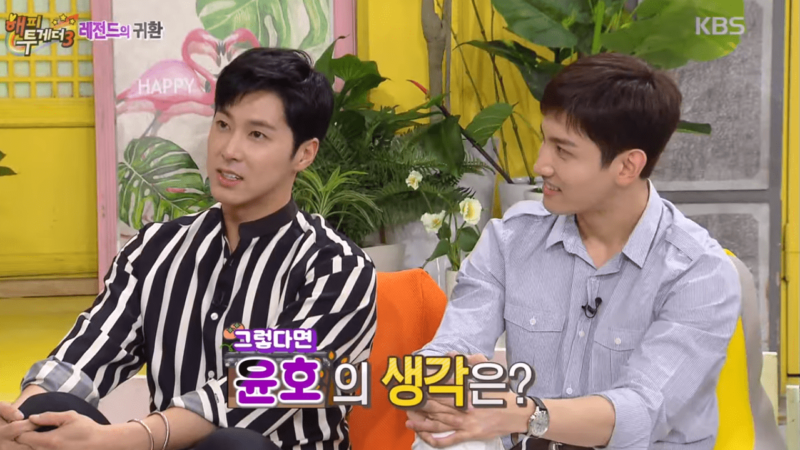 TVXQ Talks About Competition And Changes In K-Pop

On October 5, TVXQ appeared on “Happy Together” to talk about various topics, including changes in the K-pop industry over the years.

Yunho talked about a change in K-pop lately that shocked him. He said, “The number of members [in groups] increased.” He said he thought TVXQ had a lot of members with five people in the group back then and admitted he had felt dizzy when he saw how many members were in Super Junior.

Yunho mentioned I.O.I and Wanna One, recent K-pop groups that are known for having many members. He said, “I felt pressured that I would fall behind the times if I didn’t learn their names quickly.” When host Yoo Jae Suk said he has to study their names now, Yunho joked, “I have to study like I’m preparing for my SATs.”

Host Park Myung Soo asked Changmin how he felt when he saw Wanna One, and Changmin made everyone laugh by replying, “I have no sense of rivalry [with them]. I hope they will walk their own path.”

Host Jun Hyun Moo pointed out that Yunho might think differently. Yunho admitted, “We still have to show the years of experience of people our age. New generation and new methods aren’t always the best.” He added, “The moment those things and our knowledge combine, a new civilization will be developed.”

Following their discharge from the military, TVXQ recently released solo songs via SM STATION by both Yunho and Changmin. The duo is also set to appear on JTBC’s “Ask Us Anything” and “Let’s Eat Dinner Together”. Yunho will also be in a drama entitled “Meloholic” that will start airing on November 6.