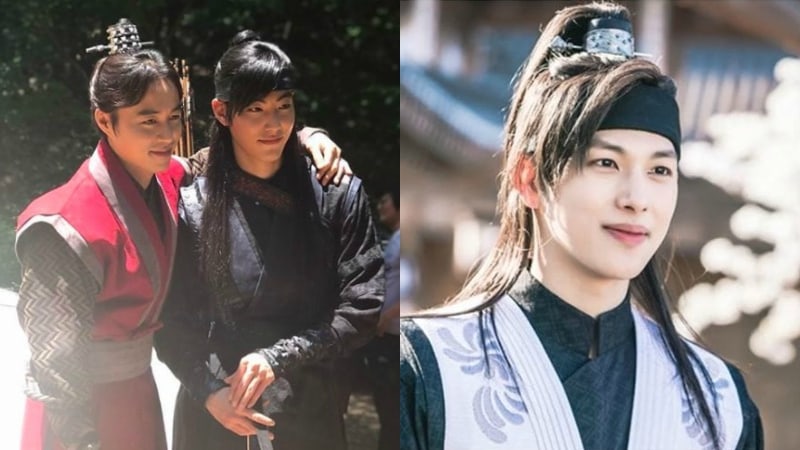 Park Young Woon has expressed his gratitude towards the actors he worked with in his debut drama “The King Loves.”

Park Young Woon played the mysterious character Moo Seok, a follower of Song In (Oh Min Seok), in the MBC historical drama that aired its finale last month. In a recent interview, he said that he was grateful to the show’s director and producers for giving him the chance to act in the drama.

He also had nothing but good things to say about his fellow actors. He mentioned that he was very nervous on the first day of their script reading because he was sitting next to people he’d only ever seen on television.

“However, when we went out to dinner, Im Siwan started a conversation with me, and introduced me to other people,” Park Young Woon explained. “He couldn’t stand seeing a rookie actor like me looking like I was alone, and he had really great leadership skills. He also would bring me food, and if there was something I was worried about in terms of acting, he would bring me over to the director and say, ‘Young Woon says he’s curious about this part.’”

Park Young Woon also talked about how grateful he is to Oh Min Seok, as well as Jung Bo Suk and Jang Young Nam who always gave him advice. “Oh Min Seok was in 80 percent of the scenes I was in,” said Park Young Woon. “Every time I made a mistake so there was a blooper, he would comfort me and say, ‘It’s okay, try it like this.’”

He said that he had the chance to meet many older actors who offered him help. He also expressed his gratitude to Park Ji Hyun, who he was matched up with in the drama, and said they were able to easily act together because they become friends early on in filming after funny mistakes in the shoot.

Park Young Woon has already carried out his mandatory military service, and he was asked if he had any advice for Im Siwan, who recently enlisted in the army, when the cast recently visited him. “I’m not in a position to give him advice, so I just said, ‘I’ll come back and visit you again,’” he said with a laugh. “We also promised to do a video phone call.” He added that Im Siwan isn’t stationed far away, so he will most likely go see him again.

Watch “The King Loves” from the first episode below!