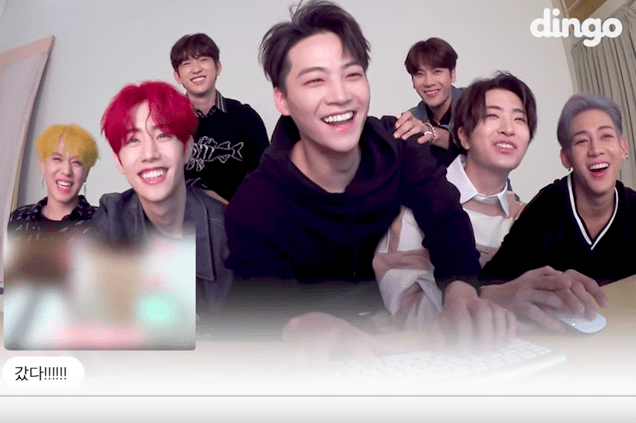 Watch: GOT7 Has Fun Typing Out Answers On Their Drinking Habits And Comeback Album

On October 8, Dingo Music uploaded a video titled “[Type Talk] GOT7” where the interview was conducted via chatting on a computer.

After group and individual introductions, Dingo asked the youngest member Yugyeom to share moments when he notices that the other members have aged. Yugyeom answered, “When Mark gets sleepy for no reason.” Dingo then asked him about the rumors of him walking around the dormitories naked, to which he responded, “I just wear shorts.”

The GOT7 members also shared that they drink often together mostly in their dorm or at wine bars. When asked about each member’s drinking habits, self-proclaimed longest drinker of the team Youngjae revealed that Jinyoung leaves as soon as they say cheers, Mark leaves the moment his face gets red, Jackson gets hyper quickly, Yugyeom says he has to go to the bathroom then never comes back, BamBam is picky about lighting and doesn’t drink unless there is dim lighting, and JB is drunk the moment he says he’s not drunk.

GOT7 also excitedly typed about their upcoming comeback album and teased that they have an “amazing composer on the title track named Def Soul (JB’s producing name).” The group described their title track “You Are” as a “fun, vibrant song” and JB mentioned that it was difficult to come up with the choreography.

Jinyoung typed, “We are coming back after seven months with our seventh mini album. We named the album ‘7 For 7‘ to show once again that we are one. It’s the first time we are promoting with a title track produced by one of our own members and the first time all of the members participated in making the album so it’s more special.”

The interview ended with messages of love and thanks from GOT7 to their fans.

Watch the unique interview below!

GOT7
Jackson
Yugyeom
BamBam
JAY B
Jinyoung (GOT7)
Mark (GOT7)
Youngjae (GOT7)
How does this article make you feel?