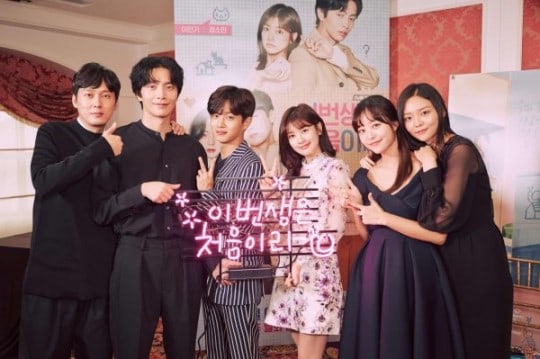 tvN is gearing up to being airing their new Monday-Tuesday drama “Because This Is My First life” on October 9, and the six main cast members gathered to express their excitement for their drama’s premiere.

Jung So Min plays the role of Yoon Ji Ho, an assistant screenwriter who is in desperate need of a home. She said, “I think it’s a drama that will tell all the stories that need to be told about families, lovers, and more. I think it will be able to connect with viewers and be a comfort to them, especially the youth.”

Lee Min Ki will take on the role of ‘house poor’ Nam Sae Hee, who has bought a home to call his own but now has to pay off a lot of debt. He stated, “It’s a cute and funny romantic comedy that also touches upon issues that many people in this generation face and can relate to.” 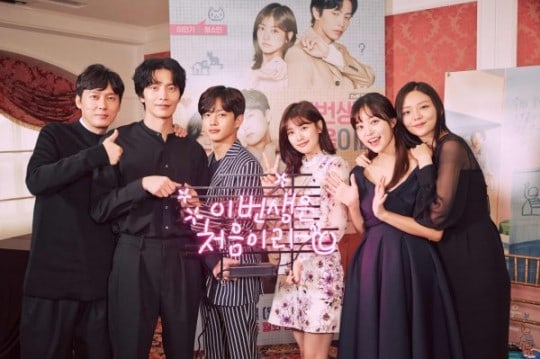 Woo Soo Ji will be a character who is a cool and confident person who has her own sense of what a relationship should be like, and will by played by Lee Som. She said, “Everyone is having fun and working hard on set, so please anticipate our drama.” Meanwhile, Park Byung Eun, who plays the ‘macho, one-way man’ Ma Sang Gu, said, “We hope that viewers will be able to relate to a lot of things in our drama and have a good time watching it.”

Kim Ga Eun will play Yang Ho Rang, whose dream is to get married and become a housewife, while Kim Min Suk will play her long-time boyfriend Shim Won Suk. Kim Ga Eun said, “We hope to be a funny and approachable drama to our viewers,” while Kim Min Suk added, “You’ll be able to choose which story to follow from three different couples. We have so much planned that you won’t even think about touching your remote and seeing what’s playing on other channels.”

“Because This Is My First Life” is a romantic comedy that mainly follows the story of how Yoon Ji Ho and Nam Sae Hee end up living in the same house together. The drama plans to captivate viewers with its wit and relatable storylines. The first episode will air on tvN at 9:30 p.m. KST on October 9.

Will you be watching this drama?

Jung So Min
Kim Ga Eun
Kim Min Seok
Lee Min Ki
Lee Som
Park Byung Eun
Because This Is My First Life
How does this article make you feel?