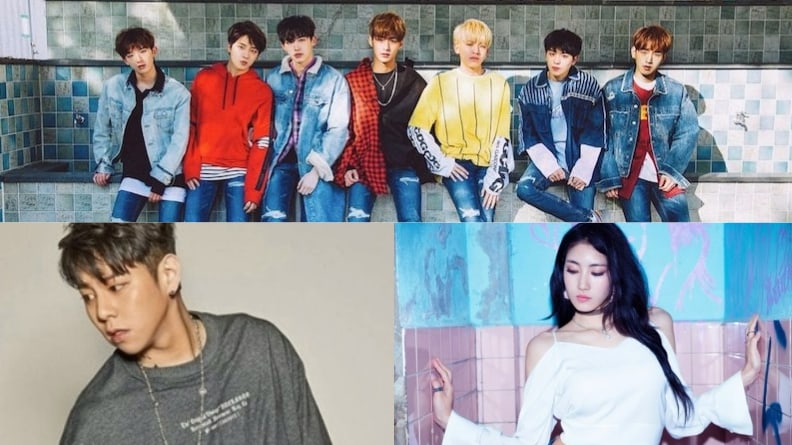 More idols who have already debuted have been named as participants of the upcoming YG survival show “MIXNINE.”

On October 10, Romeo’s agency CT Entertainment posted on the group’s fan cafe to confirm that they had received an offer from the JTBC program. They stated that after a long period of consideration with the members, it was decided that the group will be appearing on “MIXNINE.”

Romeo is a seven-member boy group that made their debut in May of 2015 and has gone on to release four mini albums.

Rapper Woo Taewoon is also reportedly joining “MIXNINE.” He is the brother of Block B’s Zico and appeared on both “Show Me the Money 4” and “Show Me the Money 5,” and was also a previous member of the groups Coed School and Speed. It’s been reported that Woo Taewoon is currently aiming to release a new song at the end of October, although he has been undergoing treatments due to throat issues.

Another addition to the reported lineup is H.U.B member Rui. She has promoted both as a solo artist and with the rookie hip-hop girl group H.U.B, which debuted in February of this year. She is also known for having been the fastest female idol in the sprint event at the “2017 Idol Star Athletics Championships” in January.

“MIXNINE” is a JTBC show produced by Han Dong Chul in which YG founder Yang Hyun Suk visits agencies to discover trainees and debuted idols who have the potential to be new stars. The show will include 400 contestants vying for spots in the final nine-member female and male groups, which will compete against each other for the chance to debut.

Other groups that have confirmed their appearance on “MIXNINE” include KNK, ONF, 24K, DreamCatcher, and more. “MIXNINE” will premiere on October 29.