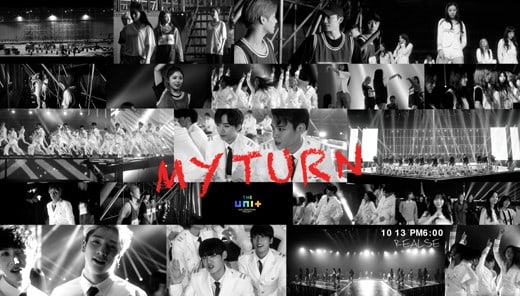 KBS’s new survival show “The Unit” has revealed some more information about what fans can look forward to as the show gears up for its premiere.

A teaser video was recently released for a “The Unit” MV entitled “My Turn,” which shared a glimpse of the show’s first mission and revealed a first look at which of the idols had made it through the auditions.

On October 12, a source from the “The Unit” explained that the song “My Turn” is due out on October 13 at 6 p.m. KST. The track is described as a group song by all 126 idol contestants, both female and male, and is said to have an addicting melody and feature lyrics about the idols’ passion about taking on this challenge.

The “My Turn” music video will be aired on television during KBS’s “Music Bank” on October 13.

The source has stated that following this first group mission song, there will be songs for the male team and female team released later on.

“The Unit” is an “idol rebooting” survival show in which idols who already have debut experience will have a second chance at taking the spotlight. Contestants include members of Boyfriend, HOTSHOT, DIA, MADTOWN, ToppDogg, Dal Shabet, SNUPER, LABOUM, former SM Rookies member Ji Hansol, and many more.

It will premiere on October 28 on KBS.