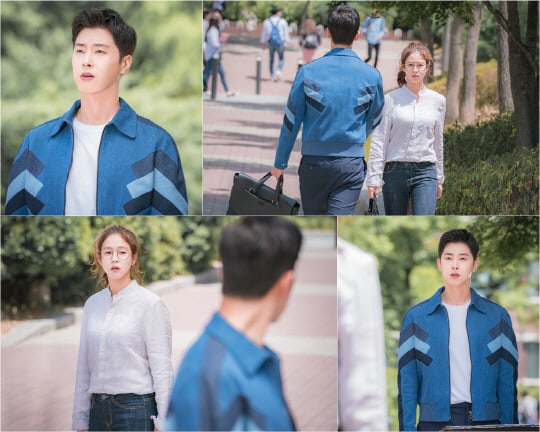 “Melo Holic,” which is set to air sometime in November, tells the story of a man named Yoo Eun Ho (Jung Yunho), who has the ability to read minds, and Han Juri (Kyung Soo Jin), a woman who has a split personality.

The latest stills show the atypical meeting between the two main leads. When they happen to brush past by each other on the street, Yoo Eun Ho looks back at Han Juri, who in return looks at him with a suspicious expression on her face. As Yoo Eun Ho is able to read a person’s mind just by coming into contact with them, many viewers are curious to see if he noticed her secret.

The PD for “Melo Holic” stated, “The relevant scene shows a situation where Jung Yunho is unable to process what he’s seeing when he comes across the unpredictability of Kyung Soo Jin and her two sides. Viewers will be able to see their constant quarrelling as well as their bright and cheeky chemistry together in the first episode.”