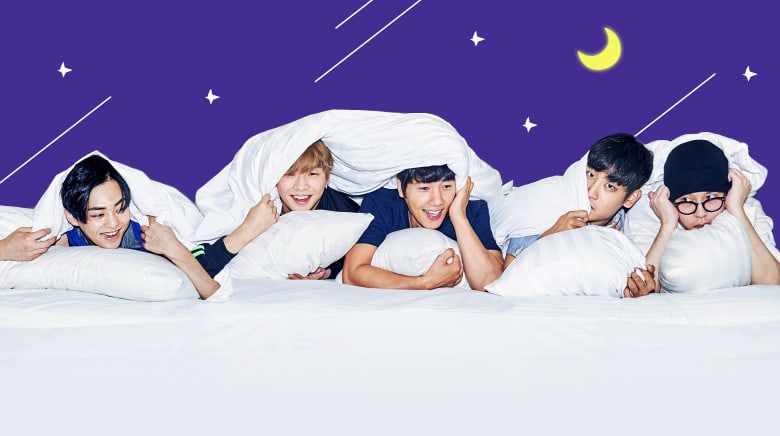 Highlight member Yong Junhyung has shared a bit of insight into what it was like to film the reality show “It’s Dangerous Beyond the Blankets”!

The recent MBC pilot show featured several male celebrities who are known to be homebodies, with the guys all put into the initially awkward situation of arriving at a rental home to spend time together without being introduced. At first, the cast members all got there separately and chose rooms on their own, essentially hiding until the next morning, and Yong Junhyung was particularly shy about leaving his room in case he might bump into an unknown guest.

However, once the cast was all able to break the ice, they ended up having a great time together.

Highlight appeared on the October 18 episode of the radio show “2 O’Clock Escape Cultwo Show,” and Yong Junhyung was asked about his time on the show.

“I had to leave in the middle because I had something to do in relation to our album preparation,” he said. “It was really difficult when I first got there. I didn’t know anyone at all, and there were no staff there at that point so it was just us left by ourselves.”

“Lee Sang Woo, Kang Daniel, and Parc Jae Jung had great personalities,” he added. “I wanted to stay there longer.”

EXO’s Xiumin also appeared on the show, but as he arrived in the middle, Yong Junhyung and Xiumin didn’t get to spend time together.

Highlight recently made a comeback on October 16 with their new mini album “Celebrate,” featuring the title track “Can Be Better.”

Yong Junhyung
Highlight
It's Dangerous Beyond the Blankets
How does this article make you feel?