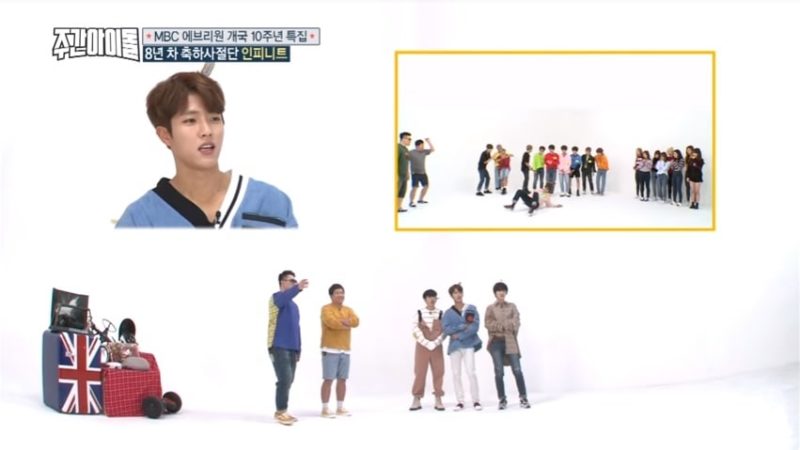 Just last month in September, Golden Child’s Daeyeol made an appearance on “Weekly Idol” and recreated his older brother INFINITE’s Sungyeol’s famous sexy dance. During the latest October 18 episode of the show, INFINITE’s Sungyeol was able to witness that a video of that dance.

The hosts Jung Hyung Don and Defconn talked about how they saw someone in Golden Child who resembled Sungyeol, but didn’t know he was actually the INFINITE member’s brother until later. Sungyeol said, “I watched that episode, too. I thought you guys knew [he was my brother].” Jung Hyung Don joked around, saying, “We didn’t know. We didn’t even know you well either.”

The hosts were kind enough to allow Sungyeol witness Daeyeol’s dancing on the show again. Curious, Sungyeol turned towards the screen. As soon as Daeyeol appeared on the screen, Sungyeol became slack-jawed and was at a loss of words. In disbelief, Sungyeol questioned, “Didn’t I do that before?” Sungjong chimed in at the same time, “That’s something you’ve [danced] before.”

Sungjong complimented Daeyeol on his dancing, but Sungyeol didn’t seem to agree with him. He stood there in complete shock and trauma, commenting, “Watching that, it makes me deeply self-reflect my past actions.”

Defconn comforted him, saying, “But that’s your family’s appeal. Sexiness runs in your family. In fact, Daeyeol took more initiative than you did in your rookie days.” Sungyeol confessed, “I couldn’t speak [in my rookie days].” Jung Hyung Don also comforted him by telling him how INFINITE’s leader Sunggyu had previously praised him and his humor.