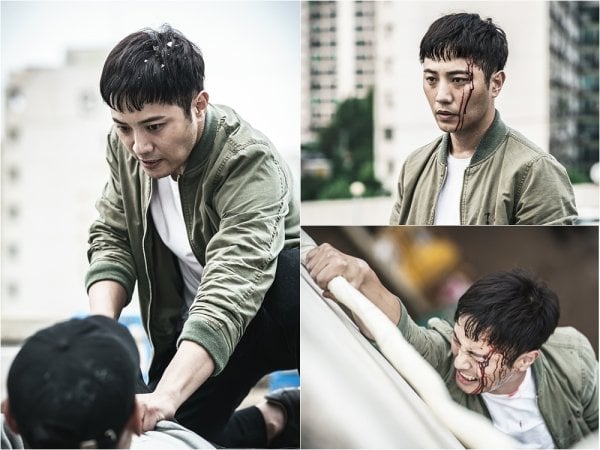 The action drama’s plot revolves around Bukcheon, a fictional city controlled by the Jang family for three generations. Jin Goo will be playing the role of Jang Joon Seo, a homicide detective who tries to uncover his family’s hidden secrets so he can reveal the truth behind the death of his beloved wife.

The newly released stills show Jin Goo as Jang Joon Seo in a fierce fight with a criminal. His hair is covered with bits of cement, and there’s blood running down from his forehead. In one photo, he is dangerously dangles from a building while clinging onto a mere iron pipe for life. The way he glares at the criminal with a life-or-death look in his eyes and his unstoppable determination to punish injustice truly portrays the kind of detective he is.

The scenes featured in the still cuts were filmed back in September in Seoul. The production crew was impressed with Jin Goo’s passion for acting as he relentlessly filmed chasing and thrilling rooftop fighting scenes. He also perfected the wire scene where he had to dangle from the edge of the rooftop.

The production crew praised Jin Goo, saying, “We were touched by how the look in his eyes changed on the very first day. As filming progressed, we didn’t see him as Jin Goo, but rather Jang Joon Seo. The character Jang Joon Seo chose to be a detective and is punishing himself because of his past scars. Jin Goo is already immersed as Jang Joon Seo, not just with his acting in action scenes, but also with his detailed emotional acting.”

The first episode of “Untouchable” will air on November 24 at 11 p.m. KST.