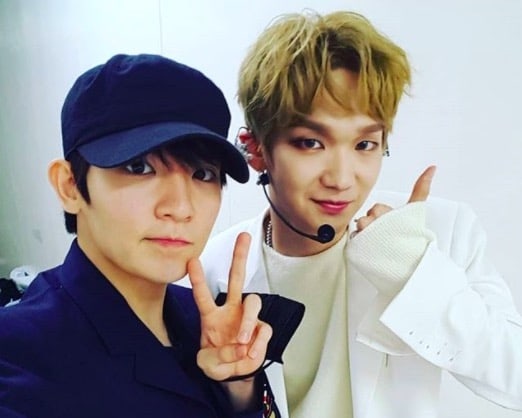 Kenta is well known for being a longtime fan of Teen Top, and he even once wore a shirt to their fan signing event that read “I’m Japan’s Ricky.” After competing on “Produce 101 Season 2” this year, Kenta got to become friends with Ricky when they filmed together for a short track speed skating show.

Kenta is now a part of the project group JBJ, and Ricky went to their debut showcase to show his support.

On October 20, he shared some photos with Kenta to his Instagram. He added the sweet message as the caption, “The JBJ showcase was so cool!! You really did great, you were way cooler than me.. huge congrats, it was the best. I’ll be your fan now.”

Kenta made his debut with JBJ on October 18 when they released their mini album “Fantasy” featuring the title track of the same name.

Ricky
Teen Top
Kenta
JBJ
How does this article make you feel?