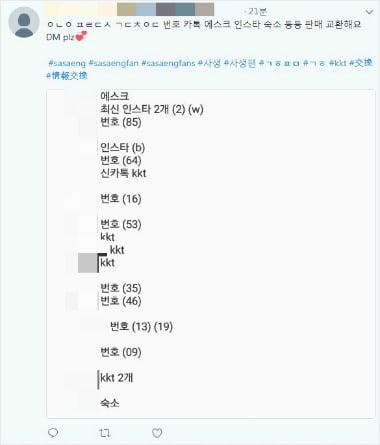 Reporters from Korea’s CBS NoCut News investigated this growing phenomenon of selling popular idol group members’ personal information through social media. When they searched for specific keywords, a post came up with a list of things for sale. It listed things such as “[idol] club audio,” “[idol] kiss photo,” “[idol] smoking video,” and “[idol]’s girlfriend photo.” It also sold stories of encounters with idol members and the phone numbers of members’ parents.

To give a taste of what they have, some sellers even released the last four digits of an idol member’s phone number or a screenshot of a member’s KakaoTalk profile photo. 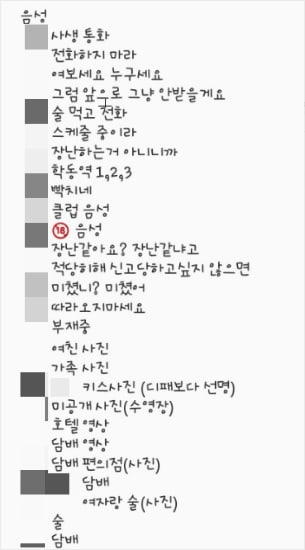 The reporters sent a Twitter DM to one of these accounts to see if it was really possible to purchase such information. Communicating with these sellers was done through KakaoTalk’s Open Chat feature (available for anyone to chat anonymously) or Twitter DMs.

Reporters tried to purchase information about a popular idol group member’s two private Instagram accounts and two KakaoTalk accounts. The seller responded that this was possible and that the total price was 16,000 won (approximately $14), which meant it cost about 4,000 won ($3.53) for each piece of information. 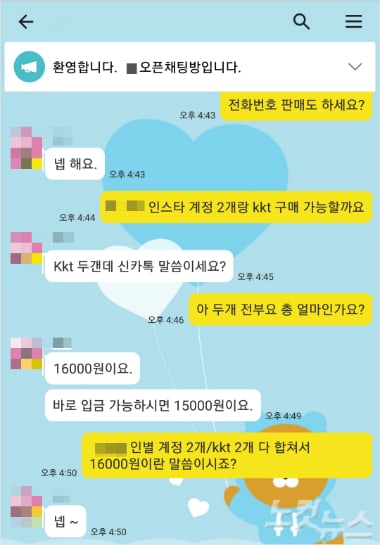 Lim, someone who has experience buying this kind of information, said, “These are accounts that show up when you search for certain keywords. I think people buy it out of curiosity. In the past, this kind of information was something only sasaengs knew or circulated amongst themselves, but these days they’re out for sale which means that anyone can buy that kind of information. This is an even bigger invasion of privacy for idol groups.”

Flight information of idols, such as details about departure, arrival, flight, and reserved seat number, is also something that is being sold universally. In comparison, it’s much easier to find accounts selling flight information.

Lee continued, “If the reservation changes, [the sellers] update you in real-time. If people want to sit next to the members, they will tell you the seat number. A lot of foreign fans from China and Southeast Asia sell this [information]. Airplane tickets can’t be queried just with basic personal information, but I believe [they] use a hacking program or a certain site. Some even sell the method [for finding flight information].”

Lim explained, “The thing about personal information is, once you find out one piece, the rest comes easily. Being a ‘fan’ doesn’t mean you can’t work at an entertainment agency, airline, news agency, or credit card company. If you’re lucky, you can get close to someplace that stores personal information of idol group members. Otherwise, some accept money and sell this to fans. For example, I know that international fans in China hack into email accounts.”

In reality, due to these these events, a majority of idol group members reserve flights under a different name or don’t open cell phone contracts under their real name.

Lee revealed, “For a flight to be confirmed, the name on the passport has to match the name on the reservation. So, an idol member will book the reservation with an incorrect English or Korean spelling. Then, they can cancel their reservation citing the name was incorrect, and book a new one. I also know that after their personal information was leaked, almost no idol opened up a cell phone account under their real name.”

It is difficult for entertainment agencies to deal with the selling of idol group members’ personal information. Because it is a relatively new phenomenon, a legal manual on how to properly handle this problem doesn’t even exist. A source from an entertainment agency was shocked when reporters asked if he was aware of such things being sold on social media.

The source commented, “While working in this field, I was surprised at how fans could show up at unannounced schedules, but it’s the first time I’m hearing about such information being sold. It does seem like a problem. They’re using their interest towards stars to make a profit.”

Then he added, “If they find out information and trespass dorms, leave malicious comments, or sign up on strange websites, then we can report it to the police. Most times, it’s sasaengs who gather this kind of information, but anything other than that, it’s difficult to figure out a solution. Their actions can make idol group members uncomfortable, but regular citizens can also look up celebrities, so it may be just the nature of the job. It’s very different from suing for slander.”

sasaengs
How does this article make you feel?