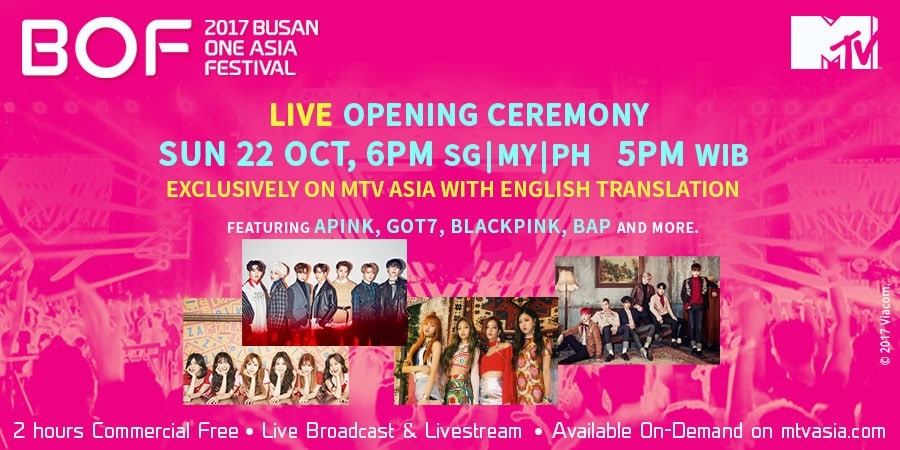 Watch Wanna One, BLACKPINK, GOT7, And More Perform At Busan One Asia Festival Live On MTV Asia

Tonight, all of your favorite K-pop idol groups are coming together for one of 2017’s most highly anticipated festivals, the Busan One Asia Festival!

Taking place over the course of 10 days, the Busan One Asia Festival celebrates Korean pop culture and showcases the best of Hallyu for fans all around the world through concerts, events, and exhibitions.

Previously, it was announced that Wanna One, BLACKPINK, GOT7, GFRIEND, Apink, ASTRO, SF9, MOMOLAND, NU’EST W, iKON, B.A.P, NCT 127, and SECHSKIES will be performing at the opening ceremony for the festival.

This year, fans will be able to watch a live broadcast of the opening ceremony, which is set to take place tonight, October 22 at 6 p.m. SG/MY/PH, and 5 p.m. WIB, exclusively on MTV Asia! So don’t forget to tune in for the opening performance of Asia’s No.1 Hallyu festival, Busan One Asia Festival!

Check out the full lineup, which includes KARD, JBJ, MXM, VICTON, and more, for the festival here!

Missed the festivities? Don’t worry, the opening ceremony will be back for rebroadcasts this week, only on MTV Asia!