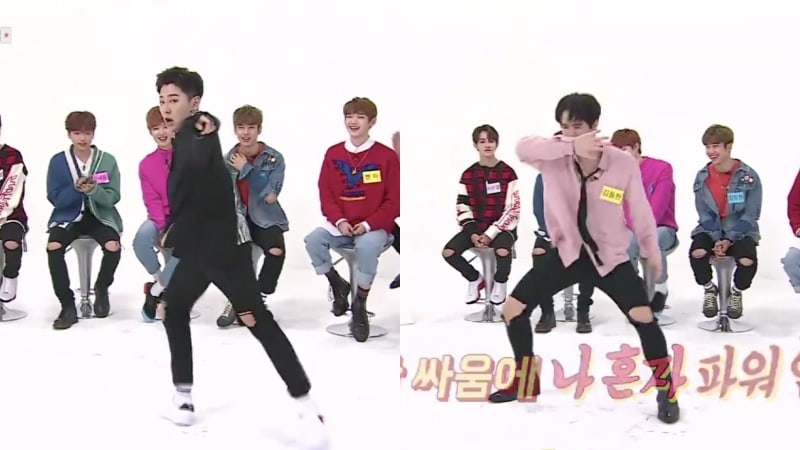 On this week’s episode of “Weekly Idol,” “Produce 101 Season 2” trainees from JBJ and MXM, as well as Samuel and Jeong Sewoon, are holding a reunion.

During one of the segments, JBJ’s Noh Tae Hyun and Kim Dong Han perform special dance covers of their senior groups.

First off, Noh Tae Hyun performs a krump version of Apink‘s “Mr. Chu.” He looks embarrassed in the beginning, but as soon as the chorus part comes up, he goes into dancing mode and shows off krump moves that impress the hosts and “Produce 101 Season 2” trainees on the show. When he’s finished with his dance, he takes a polite bow, and the hosts praise him for his dancing skills. Defconn says, “You look so cute, but you’re very good at dancing.”

Next up is Kim Dong Han who dances to songs by BTS and EXO at double the speed. He reveals, “I was in a dance team, and we [danced to them] for fun many times.” Once the music starts, his members and fellow “Produce 101 Season 2” contestants stare at him in awe, and everyone on the show can’t take their eyes off of him.

Jeong Sewoon is called up to dance next, but we’ll have to wait until the episode airs on October 25 to see what the singer does!