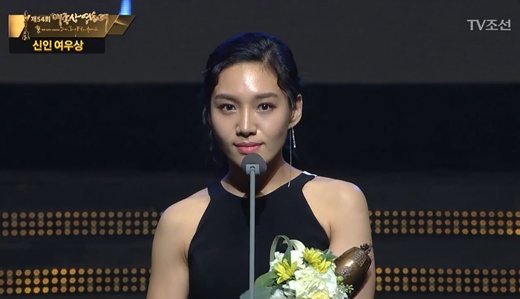 TV Chosun has responded to the controversy regarding one of their recent video clips.

On October 25, the 54th Daejong Film Awards took place at the Sejong Center for the Performing Arts in Seoul. During the awards ceremony, actress Choi Hee Seo was chosen as the winner of the Best New Actress award for her role in “Anarchist from Colony.”

In the clip showing her acceptance speech, Choi Hee Seo expressed her thanks towards “Anarchist from Colony” director Lee Joon Ik. The clip was soon swept up in controversy when netizens noticed the audio contained overheard voices said during her speech, such as “It was director Lee Joon Ik,” “Hey, isn’t he that bald old man over there?”

Once Choi Hee Seo’s speech ran past past three minutes, the voices could be heard saying, “Come on, just stop,” “This is driving me crazy,” “Who is that person?” and “Looks like we’ll be here all night. She’s driving me crazy.”

Based on the clip, many netizens assumed that these voices were the ones of the production staff during the live broadcast. TV Chosun ended up deleting the video that contained this speech on their official YouTube channel.

In response to the controversy, TV Chosun has released mixed statements. According to one news report, a source stated, “In order to provide these video clips, we use different equipment than the ones used for live broadcasts. It seems like noises from the venue were recorded.”

In another statement, a source from TV Chosun stated, “There was a ‘noise controversy’ that happened during Choi Hee Seo’s acceptance speech on October 25, but this is not a broadcast mistake. This was something that the viewers who saw the TV broadcast did not recognize. We’ve concluded that the noises were added during the process of producing the social media clips. They were working all night to remove the noise, and currently a clip without the noise is being offered.

“It was a situation where the overseeing of the awards ceremony was being outsourced. Because there were so many people in the venue, it is hard to accurately grasp whether the voices belong to a source on set or to the staff.”

Meanwhile, Choi Hee Seo received an award for her role as Fumiko in the film “Anarchist from Colony,” co-starring Lee Je Hoon.

Catch the full film below!

tv chosun
Anarchist from Colony
Choi Hee Seo
How does this article make you feel?