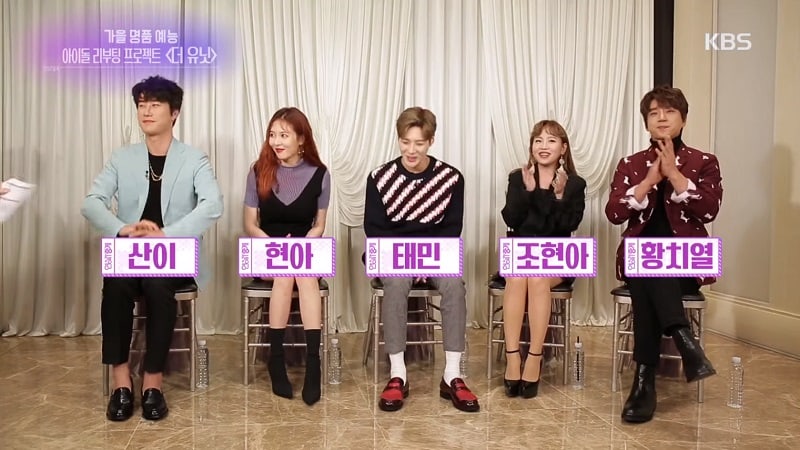 On October 27, the mentors of “The Unit” sat down for an interview with KBS2’s “Entertainment Weekly” to discuss the program ahead of its first episode. Mentors San E, HyunA, SHINee’s Taemin, Urban Zakapa’s Jo Hyun Ah, and Hwang Chi Yeol featured as guests.

Hwang Chi Yeol first discussed the difference of “The Unit” from other audition programs, pointing out it “features individuals who have already debuted. As they have already experienced the harsh realities of trainee life, these friends are even more desperate [to debut].” He addressed the rebooting aspect of “The Unit,” adding, “the show offers [the contestants] another chance. It is a program of hope.”

In regards to rebooting in his own life, San E remarked during the interview that he wants to be reborn as fellow mentor Rain because “he is a cool entertainer with a beautiful wife and a daughter.” San E also gave a sneak peek of the show, as he revealed mentors Rain and Hwang Chi Yeol performed directly on stage, to which Hwang Chi Yeol chimed in that the audience must watch “The Unit” to see for themselves.

The reporter also asked Taemin which mentor he would want to avoid if he was a contestant. Taemin replied “San E. He is very persistent and his advice was scary.” At the same time, Taemin shared that he wants to draw on his own experiences when offering advice as mentor.

Catch the premiere of “The Unit” below!