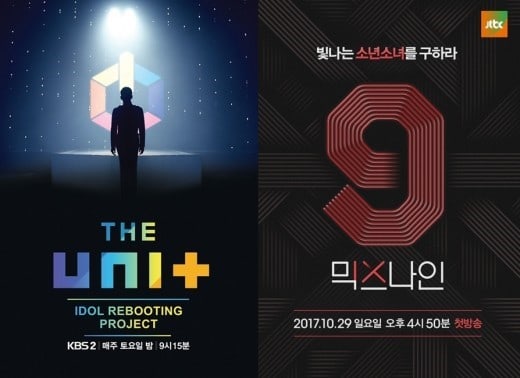 KBS’s “The Unit” beat out JTBC’s “MIXNINE” for this week’s most buzzworthy TV show.

On October 30, Good Data Corporation revealed that “The Unit” had claimed first place in the non-drama division, with an 8.2 percent share of this week’s buzz. “The Unit” had already attracted a great deal of interest online even before its premiere on October 28, managing to hit ninth place on the list without airing a single episode. “MIXNINE,” which also premiered this week on October 29, took second place.

The most talked-about celebrities on the two shows were “The Unit’s” former SPICA member Yang Jiwon, who ranked fourth in the list of most buzzworthy appearances, and “MIXNINE’s” Yang Hyun Suk, who ranked second.

Even though both survival shows attracted lots of interest, with only a 1.6 percent difference in buzz between the two, netizens also had complaints about both premieres. Many felt that “The Unit” strayed too far from its premise of being an “idol rebooting show” by allowing a trainee and an aspiring actor to participate. Viewers also complained that the judges were not objective or insightful enough in their evaluations. On the other hand, Yang Hyun Suk faced criticism for being “cold” and “inconsistent” in his evaluations on “MIXNINE.”

SBS’s “Running Man,” which featured Wanna One’s Kang Daniel this week, and JTBC’s “Ask Us Anything,” on which Honey Lee appeared as a guest, placed third and fourth respectively. Meanwhile, tvN’s redesigned “Trivia 2” received positive responses to the chemistry of its cast and managed to come in at fifth place with its first episode.

Watch the first episode of “The Unit” below!

Ask Us Anything
Running Man
The Unit
MIXNINE
Trivia 2
How does this article make you feel?