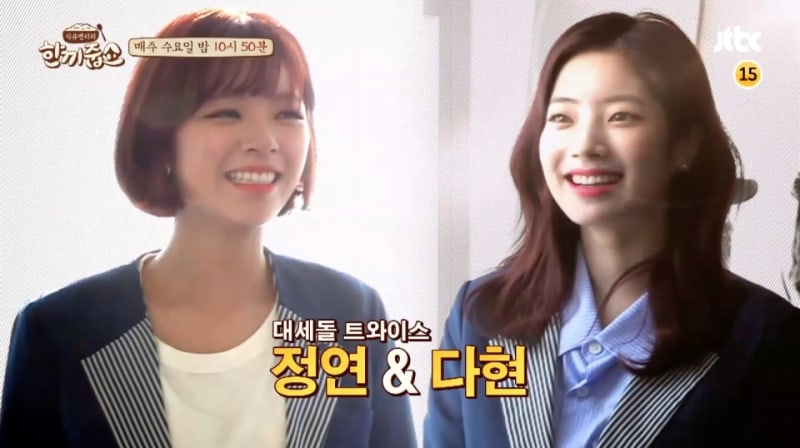 Watch: TWICE’s Jeongyeon And Dahyun Beg For Their Supper In “Let’s Eat Dinner Together” Preview

JTBC has released a sneak peek at TWICE’s Jeongyeon and Dahyun’s appearance on next week’s episode of “Let’s Eat Dinner Together!”

Jeongyeon and Dahyun will appear on the October 8 episode of the variety show, which requires its guests to wander a specific neighborhood in search of someone who will let them into their home and offer them a meal. In the preview, the TWICE members charm hosts Kang Ho Dong and Lee Kyung Kyu with their usual adorable aegyo and playful personalities.

The teaser also depicts the two girls ringing various doorbells in the Jamsil neighborhood, hoping for a friendly stranger to invite them in, but facing multiple rejections. Jeongyeon has trouble finding an apartment that will answer its intercom, while Dahyun attempts to be recognized by singing a medley of TWICE’s most famous lyrics from their hit songs.

Will Jeongyeon and Dahyun be able to eat dinner before the end of the show? Find out next Wednesday, when the episode airs at 10:50 p.m. KST on JTBC.

In the meantime, watch the preview below!

TWICE
Dahyun
Jeongyeon
Let's Eat Dinner Together
How does this article make you feel?