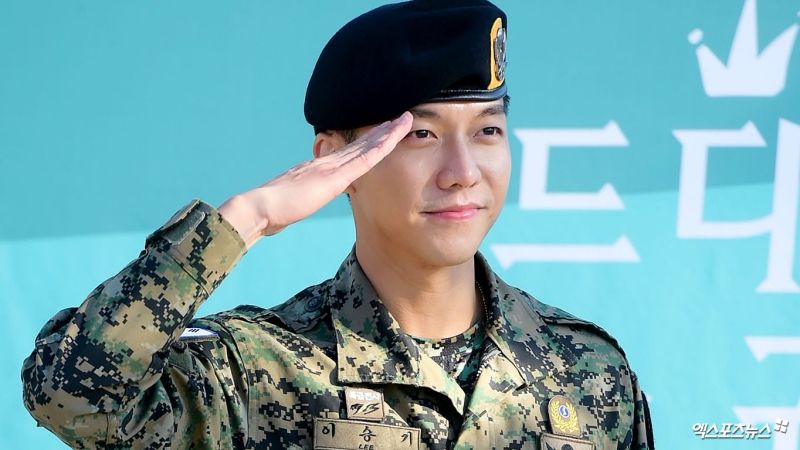 Lee Seung Gi has written a letter to his fans after being discharged from the military.

“It’s been a really long time since I said hello here. Did everyone get home safely yesterday? I worried a lot because the weather suddenly got colder.

“I would like to thank the residents in Seoksang 3 Li and all fans in and out of the country who prepared banners the night before, waited for me, and congratulated me with enthusiasm even though it wasn’t even your families’ discharging ceremony.

“I thought a lot about what I should say before passing the guardhouse yesterday but I don’t think I got to talk a lot because I was unexpectedly quite nervous because reporters were also there.

“So on November 1, I am writing this as Lee Seung Gi, a complete civilian and a reserve sergeant.

“A lot of people came to say goodbye when I first joined the Nonsan Training Center just like yesterday. I still remember it vividly. The army that I joined with surprising calmness wasn’t as easy as I thought. On the first day, I seem to have been lying on the floor in a straight line with my colleagues who enlisted on the same day (who were of course 10 years younger than me), staring at the red night light blankly for about two hours.

“As I came to get used to the army, participating in training exercises including mental training, close-order drills, shooting, and individual combat, the trainees’ biggest topic of interest was the unit assignment. ‘Where would I be sent to and under which position would I serve my duty as a soldier?’ Everyone prayed to the gods they each believed in, wishing they would have the luck of serving near their home.

“Amid those high hopes, training completion ceremony approached. The unit I was assigned to was ‘Special Warfare Command,’ the so-called special forces. I wasn’t taken aback because it was the first time I had heard of the special forces and I had no idea what the unit did. Upon realizing that the unit required intensive training exercises I hadn’t even heard of in the training center, including the absolutely necessary airborne training, I asked if they couldn’t reassign me to a different unit due to my fear of heights. In the military, however, you do what you’re told to do. Moreover, there was no way changes could be made to the assignment fairly carried out through a computer system. So with only fear as my companion, I began to serve my time in unit 13 Airborne Special Forces Brigade under Special Warfare Command.

“But one cannot predict the future. This served as an opportunity to look back on my life as I found myself excited for intensive training after overcoming my fears through the time I spent in the unit and carrying out drills.

“I learned through my mind and body that the question of with whom and how were more important than where and what.

“To Lee Seung Gi in his 20s, the line between what he could do and could not do seemed clear. If it was too hard, he had to rest and if he was tired, he had to catch his breath. But what Lee Seung Gi in his 30s learned as he served in the special forces was that the point at which he felt tired in his 20s was a little too soon, that it would have been all right for him to have taken a break after walking a little further.

“When you’re doing a marathon, you could set up a certain time as your goal and walk while taking a break in-between, but you could also set a certain distance as your goal, walking relentlessly until you reach that goal even if it’s hard.

“Of course, during night training, you become torn about whether you aren’t overdoing yourself as you look at your uniform pants stained with red after stabbing your thighs with acupuncture needles to prevent cramps, along with fears of falling due to the rugged terrains and pain in your knees. But unless you’re resting for good after truly finishing the race, taking more breaks in-between does not mean that your strength will be restored.

“Every night there were new blisters on my feet and as I repeatedly thread strings in them, I said to myself before going to sleep, again and again, I would never be able to walk the next day. Then after four hours of sleep, I put on my full gear solemnly and completed the march as I caught my breath. I’ve wondered why I had done so and how I could have done so.

“I concluded that what made it possible were my comrades and my desire to complete it. What I could never have done on my own was made possible by the support from the ones who I wanted to be with and my own determined mind to do it.

“With military discharge coming near, many people advise me to rest well and recharge before working again.

“I do relate to that, but I am already full of energy and so I wish to put this healthy energy to use, doing something I’m good at. I acknowledge that some fans are concerned.

“From now on, however, I plan to make decisions by placing things that I want to do and I’m good at as my highest priority. The results of that conviction could, of course, be dissatisfying.

“And the ones who stay by me in those moments could be staff members and my celebrity colleagues whom I work with, but it could also be my family, people at my agency, my friends, and my fans.

“I think about how happy I’ll be if I could do the things that I want with support from those who stay by my side.

“This got unnecessarily long when I’m not even a good writer. Personally, it would be great if my hopes of greeting you through the screen before the year is over come true. Please stay in good health until I come back to your television screen. What I said about letting you see so much of me that you’ll get tired, I’ll prove to you that it’s not a lie.

“Again, I sincerely thank all fans who waited for me and wish them happiness. I love you.”

After enlisting in the army in February 2016, Lee Seung Gi served for 21 months in the Special Warfare Command unit and was discharged on October 31. He is also in talks to star in tvN’s upcoming drama “Hwayugi” with Cha Seung Won, Oh Yeon Seo, and FTISLAND’s Lee Hong Ki.