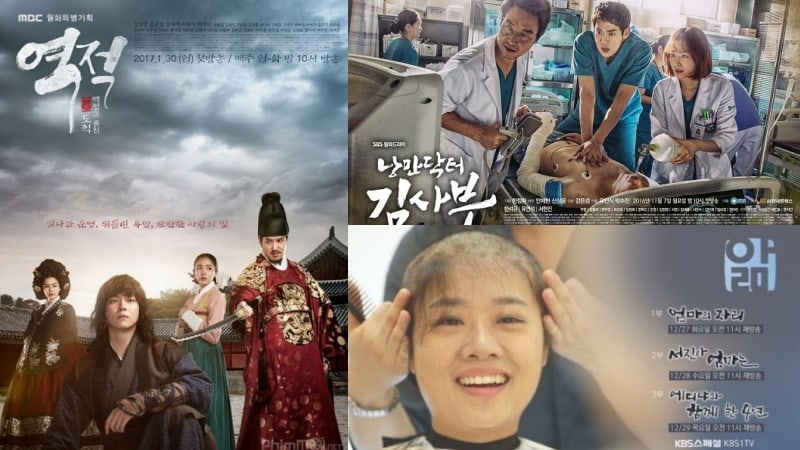 “Romantic Doctor Kim,” “Rebel: Thief Who Stole The People,” And Others Awarded At ABU Prizes 2017

Programs from MBC, SBS, and KBS were highlighted by the ABU Prizes, a prestigious awards competition presented by the Asia-Pacific Broadcasting Union (ABU). This year’s awards ceremony was held in Chengdu, China on November 3.

SBS’s “Romantic Doctor Kim” took home the Grand Prize in the Televised Drama category. The drama starred Han Suk Kyu, Yoo Yeon Seok, and Seo Hyun Jin, and followed the story of a medical team working in a small hospital. It was a much-loved production, peaking at 27.6 percent (Nielsen Korea statistics) in viewership ratings. MBC’s “Rebel: Thief Who Stole the People” received a “commended” status in the same category.

KBS’s special three-part documentary “A Cruel Gift” took home the prize for best documentary as a production that told the stories of cancer patients as they accepted death and bid farewell to their loved ones. EBS’s “Qin Shi Huang, the King of Eternal Empire” received a commendation.

Another documentary that was highlighted was MBC’s “Human Documentary Love: My Name is Shin Song Hyuk,” which received the ABU Perspective Award, an award given to the production that best represents each year’s theme. This year’s theme was “New Home” and the documentary perfectly fit the criteria, as it followed the story of Adam Crapser, who was learning to live life under the name Shin Song Hyuk in Korea for the first time since his adoption 40 years ago.

Dr. Romantic
Rebel: Thief Who Stole the People
How does this article make you feel?