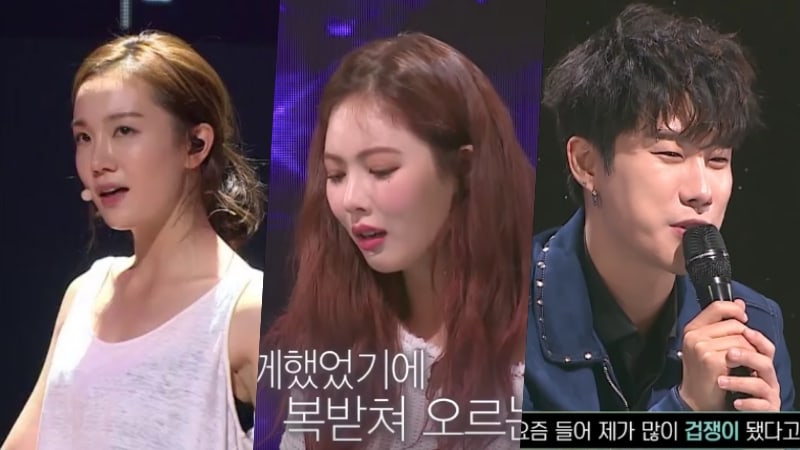 Watch: JOO Performs On “The Unit” In Front Of Former Labelmates HyunA And San E

JOO appeared on the November 4 broadcast of KBS2’s “The Unit,” where she reunited with some familiar faces.

As soon as JOO’s name was announced when it was her turn to stand onstage, mentor San E exclaimed, “JOO? Min Joo [her real name], is that you?,” while HyunA commented while tearing up, “Oh no, what should I do?”

JOO, San E, and HyunA all used to be labelmates under JYP Entertainment. In particular, HyunA and JOO had both trained to be a part of Wonder Girls, with only HyunA making the final cut, although she left the group later on.

When asked why she came out on an idol rebooting show, JOO revealed that she had originally dreamed of and trained to be an idol, but ended debuting as a ballad singer. “I contemplated a lot about if I should try for ‘The Unit’ because the public might feel disconnected since I am known as a ‘ballad singer,’ but I wondered if I’d ever get a chance like this again,” JOO explained.

HyunA couldn’t stop crying as she explained their history together to the other judges and audience members, before JOO went on to perform “The Face I Want to See” (literal translation) by Min Hae Kyung.

Afterwards, San E thanked JOO, saying how he had become motivated by watching her have the courage to stand on that stage, and he could feel her sincere feelings. HyunA added, “You seemed really happy once the music actually started. I think this was a good stage for you, and those who need a chance.”

In the end, JOO successfully moved forward with six out of six “boots,” or votes from all the judges.

Also check out the whole episode of “The Unit”!

HyunA
Joo
San E
The Unit
How does this article make you feel?