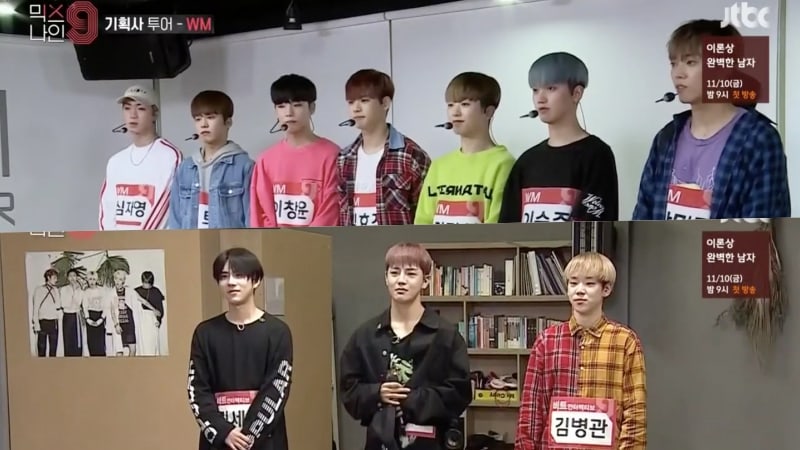 On the November 5 episode of JTBC’s “MIXNINE,” YG Entertainment’s Yang Hyun Suk made a second round of journeys to agencies while looking for talented participants. The three members of A.C.E. who auditioned—Donghun, Jason, and Wow—all managed to impress Yang Hyun Suk with their performances and received praise for their abilities. Yang Hyun Suk especially took note of Donghun, whom he commended as “the participant who most suited ‘MIXNINE’ in both talent and looks.”

ONF, the rookie boy group best-known for sharing its agency with B1A4, also succeeded in capturing Yang Hyun Suk’s attention. All seven members passed their auditions, including leader J-Us (Lee Seungjoon), who managed to secure a spot on the debut bus despite struggling with the news that his grandmother had passed away that same day.

ONF’s other leader, Kim Hyojin, also made it onto the debut bus after receiving high praise from Yang Hyun Suk. The YG Entertainment founder commented that Hyojin made him feel “as though I were watching SE7EN in his younger days.”

RBW, the agency behind MAMAMOO, faced slightly more disappointing results. Though the agency had the highest number of participants auditioning for the show, most of them failed to impress Yang Hyun Suk, who criticized their skills and level of preparation. Nonetheless, several of the trainees were able to change his mind, including VROMANCE’s Lee Chan Dong and Park Hyun Kyu, as well as “Produce 101 Season 2” contestant Lee Gun Min.

Other agencies featured on the show included Mystic Entertainment, SidusHQ, and JYP Entertainment. The episode ended on a cliffhanger, with JYP’s trainees waiting to hear their results.