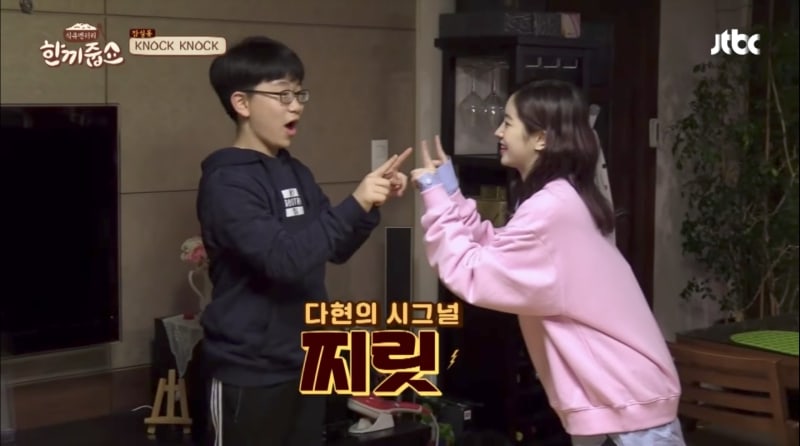 TWICE members Dahyun and Jeongyeon appeared on the November 8 broadcast of JTBC’s “Let’s Eat Dinner Together” where they went door-to-door in search of dinner.

“Let’s Eat Dinner Together” is a show where celebrities show up unannounced at a neighborhood in Korea and try find a family to eat dinner with them while getting to know them and the neighborhood. They must succeed within a certain time frame, or they have to eat dinner at a convenience store.

Dahyun teamed up with Kang Ho Dong and Jeongyeon paired up with Lee Kyung Kyu in search of dinner at an apartment building in the neighborhood of Jamsil of the Songpa District.

Dahyun sang TWICE’s “TT” and “Signal” to appeal to homeowners, while Jeongyeon calmly explained the program, but both failed their first try. Then, an elementary school student walked to the entrance of the apartment and froze when he saw the TWICE members there.

In shock, he reached into his backpack where he took out TWICE’s light stick (also known as the Candy Bong) and TWICE’s latest album “Twicetagram.” While Dahyun signed the album, the student’s older sister also came home and revealed she was also a fan.

Since they were minors, they needed their parent’s permission to film “Let’s Eat Dinner Together” in their home. The male student called his mom via the intercom and she allowed Dahyun and Kang Ho Dong to join their family for dinner.

At their home, the fan brought out TWICE’s albums and played the CD where he got to dance to “TT” with Dahyun. He expressed he was so happy he could cry, and kept glancing over at Dahyun sitting next to him in disbelief.

Meanwhile, Jeongyeon and Lee Kyung Kyu were running out of time to find a family to eat dinner with. Just then, she suggested they try calling the apartment number 1101 because her birthday is November 1. Luckily, the woman who answered was a huge fan of TWICE and invited them in before they asked.

Watch TWICE succeed in eating dinner and surprising their fans!

TWICE
Dahyun
Jeongyeon
Let's Eat Dinner Together
How does this article make you feel?