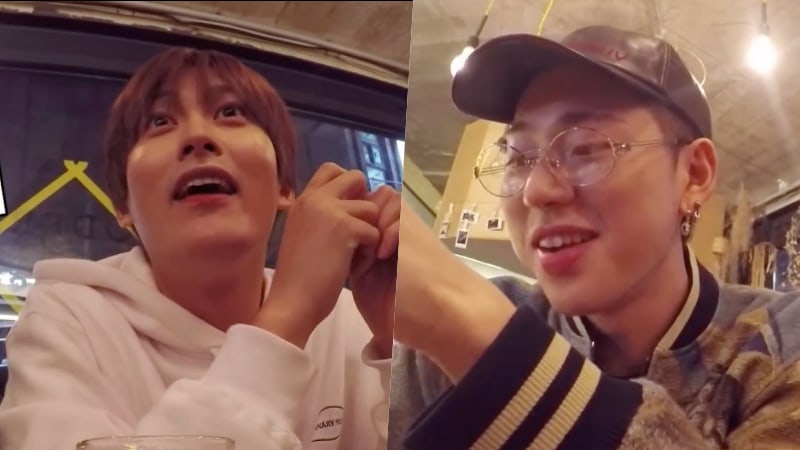 On the latest installment of Dingo Music’s “Comeback Table,” Block B talked about their recent comeback over chicken and beer.

With the release of their album “Montage” on November 7, Block B is promoting on music shows as a full group for the first time in over a year. In the video, Zico admitted that because it’s been so long since they’ve performed onstage at music shows, saying, “it’s hard to know what to do.” B-Bomb also opened up about feeling worried because of the demanding choreography for their title track “Shall We Dance,” but believed that “fans will like it.”

The group also talked about their initial impressions of the song, with U-Kwon revealing that he wasn’t sure about the song when he first heard it, but that his opinion changed later on. “I think it sounded a lot better after all the members recorded for it,” agreed B-Bomb.

Zico shared that although he usually takes two to three months to write a song, he finished composing “Shall We Dance” in four days, including all the lyrics. U-Kwon responded optimistically, saying, “Those songs are the ones that end up becoming hits — the ones that take a really short time to write.” Jaehyo and Taeil agreed, pointing out that Park Kyung had written two of his biggest hits—Block B’s “Yesterday” and his duet with GFRIEND’s Eunha, “Inferiority Complex” — in a short period of time. “Didn’t you write [one of those songs] in the shower?” joked Taeil.

While discussing movies that they had recently enjoyed, Jaehyo accidentally caught Zico off guard by bringing up the film “Memoir of a Murderer.” “I think Zico would like it,” said Jaehyo, who appeared not to have noticed that the film stars AOA’s Seolhyun, with whom he parted ways in September 2016. Zico responded by laughing awkwardly and saying that he’d seen it, while P.O tried desperately to stop Jaehyo from continuing to talk about the film. Though he eventually succeeded, Jaehyo never caught on and appeared to be confused about why P.O was intervening.

The Block B members also talked about how hard it is to live up to the demo tracks prepared by Zico, who typically enlists famous singers like Bumzu and Babylon as the guide vocals. “The guides are done by the best singers in Korea!” exclaimed Jaehyo. U-Kwon chimed in, “Now our company staff expect too much from us.” Zico added, “It was Dean who did [the guide vocal for] ‘Fear,'” referring to the song he wrote for WINNER’s Song Mino on “Show Me The Money 4.”

Finally, Park Kyung said that he was happy to be promoting with the entire group again, saying that he prefers group activities to his solo promotions. U-Kwon agreed, saying, “Everything is fun when we’re together. Even if we’re not doing anything, it’s still fun.”

Block B
AOA
Jaehyo
Zico
Seolhyun
How does this article make you feel?