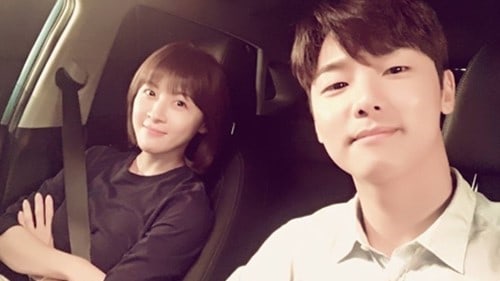 When asked about working with Ha Ji Won for a melodrama, Min Hyuk remarked, “[She] was always bright every time and every moment. I never once saw her show signs of dislike or being tired.”

He continued on to say, “Before starting, I was so honored to be acting with a great senior, but once we started filming, [Ha Ji Won] treated me as if she was my actual sister, which I enjoyed because it was comfortable.” Min Hyuk added, “Our melo chemistry also improved bit by bit. The drama was a story of a man and a woman in their 30s who mature as doctors, but grow in their love as well. I think it blended well naturally. A lot of people may have been worried in the beginning, but it became more natural. I think [we] were good in terms of chemistry.”

Min Hyuk also stated, “While there were times when I asked, ‘Is it okay to do this?’ in terms of acting, I wasn’t really cautious in holding [her] hand or doing other skinship,” explaining “We may have seemed like an older sister-younger brother relationship because of our actual age difference, but we were only one year apart in the drama so I was bold when acting.”

Meanwhile, Min Hyuk most recently played the role of Kwak Hyun on “Hospital Ship.” Since the end of his drama, Min Hyuk has been busy with CNBLUE’s Japan tour.

CNBLUE
Kang Min Hyuk
Hospital Ship
How does this article make you feel?