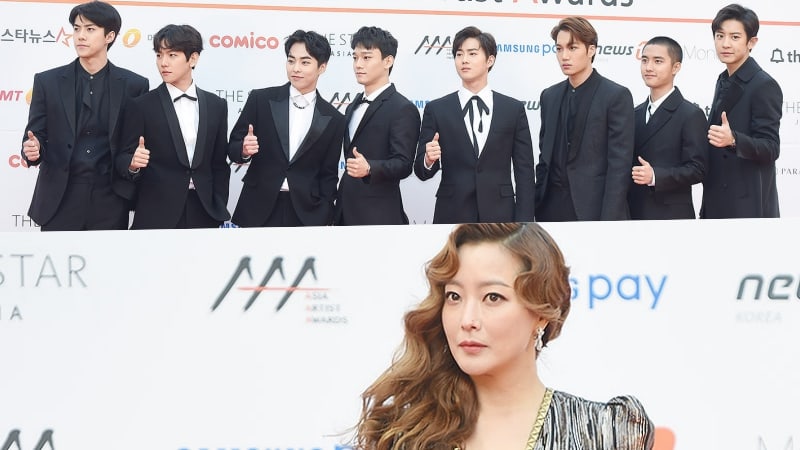 The 2017 Asia Artists Awards were held on November 15, where some of the brightest stars in the fields of music and acting were awarded for their efforts over the past year.

EXO took home the grand prize (daesang) in the field of music for the second year in a row. This also marks the group’s 21st daesang overall. They won the Popularity Award and Fabulous Award as well.

Suho started off by commenting on how happy and thankful they were to be awarded grand prize at the Asia Artists Awards for two years in a row. After thanking Lee Soo Man, staff members, SM labelmates, their parents, he continued, “…and of course our EXO-Ls. I will always remember this. Thank you very much. I am always overcome with a flood of emotions whenever we receive a meaningful award like this, or perform on stage, but we will becoming [a group] who never becomes accustomed to the feelings of excitement, nervousness, and gratitude.”

Baekhyun shared how they were working hard while preparing for their upcoming concerts, and said, “EXO-Ls we love you. There’s not much time left until our concert…Thank you for being our strength and showing us unlimited amounts of love.” Xiumin also expressed, “Thank you for such a huge award. Rather than us being remarkable, I think that we as EXO were lucky to meet our EXO-Ls. Our EXO-Ls are the best in the whole universe. I think our EXO-Ls are truly amazing people.”

In the field of acting, Kim Hee Sun was awarded the honor of the grand prize for her role in JTBC’s “Woman of Dignity.”

She stated, “Thank you to scriptwriter Baek Mi Kyung, everlasting gentleman and director Kim Yoon Chul, all the staff members, and my agency family. I want to direct this honor to the viewers who helped me regain the passion I had lost along with my will and confidence after my marriage. I think that ‘dignity’ is giving it your all until the very end wherever you are.” The actress also wittily added, “There were a lot of songs I didn’t know [performed] today, and I thought to myself that I need to start showing more interest in our younger friends.”

Check out all the performances from the award show!