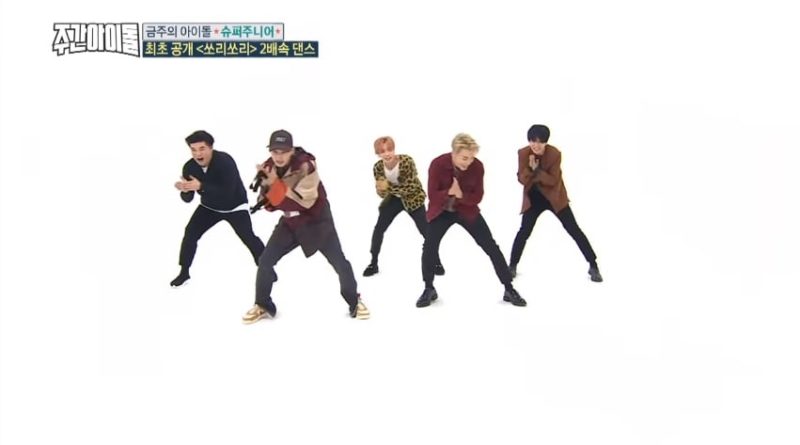 On the November 15 episode of “Weekly Idol,” Super Junior attempted their songs “Sorry Sorry” and “Black Suit” at twice the speed.

Five of the six members present (Donghae, Eunhyuk, Shindong, Leeteuk, and Yesung) started off “Sorry Sorry” first. Their flawless performance of the iconic choreography stunned everyone, including the hosts Jung Hyung Don and Defconn and fellow member Kim Heechul. Even Shindong got shocked at their own perfection and shouted exclamations of surprise in the middle of their dancing.

Jung Hyung Don looked at Kim Heechul and asked, “Aren’t you joining them?” Kim Heechul laughed and told him to wait. Eventually, Kim Heechul joined his members towards the end, and they ended just as perfectly as they started. Right away, Jung Hyung Don demanded a performance of “Black Suit” at twice the speed, stunning the tired members.

The five members began another round of hectic dancing. At first, everything seemed to flow perfectly, but during the chorus, the members lost it. Eunhyuk collapsed as Shindong shouted, “I can’t do it!” The members gave up, and Jung Hyung Don announced their failure to dance to the song at twice the speed. Kim Heechul expressed his sympathy for his members, saying, “It’s hard. It’s hard.”

Watch their attempts to do the challenge below!