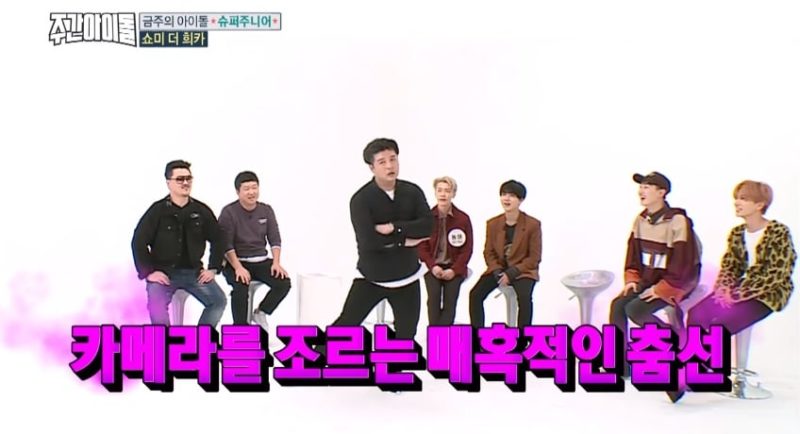 On the November 15 episode of “Weekly Idol,” members of Super Junior competed for Kim Heechul‘s heart (and his credit card) through girl group dances.

While the rest of the members seemed uncertain and uneasy, Kim Heechul, the king of girl group dances, eagerly asked if he could also join the competition, but his request was denied due to the fact that he was the judge.

The first song that played was Sunmi’s “Gashina.” Yesung slightly jerked forward, but he couldn’t bring himself to dance. At that moment, Eunhyuk cut through and danced to the song. However, he forgot the rest of the choreography, which gave Yesung a chance to come forward and do the “flower pose.” At once, Kim Heechul hit the xylophone with an unsatisfied expression, and the two of them returned to their seats in defeat.

The song “TT” by TWICE played next, and Shindong came to the center. His perfect dance steps to the song caused Kim Heechul to burst into joyful laughter and praise him for his dancing skills. Not only did Shindong know the choreography to “TT,” but he also knew the steps to TWICE’s “Cheer Up” and GFRIEND’s “Rough” as well. In the middle of dancing, he turned to the rest of his baffled members and demanded, “Isn’t anyone going [to dance]?”

Finally, Donghae and Yesung came out to dance to “Gee” by Girls’ Generation, earning a pass from Kim Heechul.

Watch their hilarious dancing below!

Meanwhile, Super Junior is currently promoting their title track “Black Suit” from their newest full album “PLAY,” and the group has recently won the Legend Award and the Fabulous Award at the 2017 Asia Artist Awards.