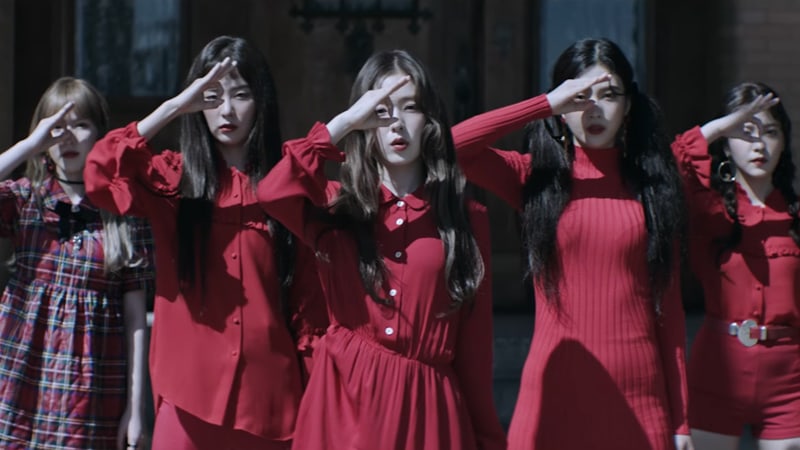 Behold, everyone! Your favorite murdering beauties are back. After going for each other in the MV for “Russian Roulette” and trying to act like nothing happened in “Red Flavor” (we see you, girls!), this time Red Velvet take on other people in their new MV “Peek-A-Boo.” With a chorus that may remind you of a certain yellow electric mouse, the song is really, seriously, I-can’t-stop-whistling-it catchy. Here’s a list of things we loved about the MV, minus the fact that the song is killer, because that’s a given.

Combining the “red” and “velvet” sides of their dual concept, “Peek-A-Boo” makes it impossible to distinguish between bright and upbeat or dark and mysterious because it kind of is both. Red Velvet talked about how they hope to mature a little faster as they show both sides – a perfect version of themselves – thus the title “Perfect Velvet.” Being mysterious and bright at the same time, hunting those poor boys with smiles on their lips, the girls make the MV pretty creepy and definitely mesmerizing.

We all remember Irene, Seulgi, Wendy, Joy, and Yeri trying to maybe not exactly kill but at least severely injure each other in the “Russian Roulette” MV. While still practicing a little by aiming crossbows at each other, this time they’re out to catch innocent delivery boys. Looking at their hunting trophies, the girls are pretty successful at what they’re doing. It’s fun to watch Red Velvet continue to play with a creepy psychopath image in their MVs.

Yes, they could probably hunt you down with a crossbow, but they’re dressed like a glittery rainbow while doing so. From a victim’s perspective, that’s probably pretty confusing to say the least. When they don’t look like magical rainbows, they’re dressed in blood red dresses, which make them look equally gorgeous and creepy. To top it off, they’re wearing red crochet crowns to accompany their dark hair colors. Really, we could fill pages and pages with text about how good all of Red Velvet look in this MV.

In almost every Red Velvet choreo, there’s a move that goes down in K-pop history. Just remember the robotic moves from “Dumb Dumb Dumb” or of course the classic ice cream eating move from “Ice Cream Cake.” Right now, we can just guess which move it’s gonna be for “Peek-A-Boo” – it might be the sideways booty shaking or the actual peek-a-boo-hands move, but one thing is already sure: the choreo perfectly brings out Red Velvet’s charms and the flow of the song; plus, it makes you wanna dance along, even though it might look nothing like the perfectly timed moves of the girls.

Summarizing the story, the girls live in a sorority-style house where they practice killing people and offering sacrifices to probably occult forces – you know, everyday sorority activities. The plot seems to be loosely inspired by novels like “The Beguiled” and “Picnic at Hanging Rock,” or their respective film adaptations – all revolving around mysterious occurrences at girls’ boarding schools. Combined with the feeling of 70s/80s B movies and slasher films, it’s pretty obvious that, at least for one person, it’s probably not going to end well. That we know, but there are so many questions left unanswered: Why is Irene shaving Seulgi? What the… What is sitting on Yeri’s lap? Who really pretended to save the pizza boy? And how do they all look so good?

We don’t know about you, but pizza definitely holds a very special place in our hearts. So of course it had to be it’s own item on this list. Have you ever seen a diamond pizza? Or a pizza house? Red Velvet have both! We want to move into the pizza house!

What do you think of the Red Velvet comeback? Did you like the “Peek-A-Boo” MV? Tell us in the comments!

daisygonzo strongly believes that if you chant “Red Velvet” in front of a mirror three times, they’ll appear and teach you the choreo to “Peek-A-Boo.” That’s pretty scary to her because a) she dances with the grace of a potato and b) she’d freak out if Red Velvet appeared in her tiny apartment. Follow her Instagram for more.