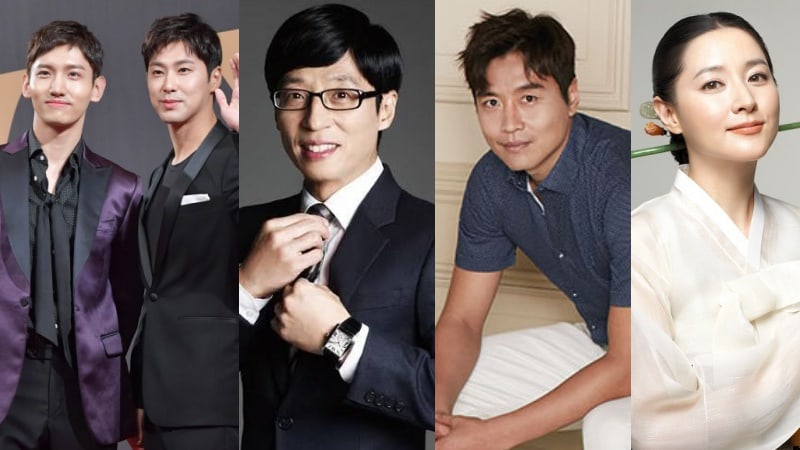 Celebrities have come forward to lend the people of Pohang a helping hand following an earthquake last week that devastated the region.

It was confirmed on November 20 by various organizations that TVXQ, Yoo Jae Suk, Lee Dong Gook, and Lee Young Ae each made donations to help the victims of the Pohang earthquake.

ChildFund Korea, which specializes in helping to improve children’s welfare around the world, revealed that TVXQ donated 50 million won (approximately $45,400) to the organization on November 17. Their donation is set to be used to help cover the living expenses of children from low-income households in Pohang.

A representative of the Korea Disaster Relief Association, also known as Hope Bridge, announced that both Yoo Jae Suk and Lee Dong Gook had donated 50 million won each to help the victims of the earthquake. FNC Entertainment confirmed that Yoo Jae Suk had made the donation but added, “We were not aware of his donation. We believe he quietly made the donation personally.”

The Korea Foundation for Persons with Disabilities revealed that actress Lee Young Ae had donated a total of 160 million won (approximately $96,300) to help the victims of the Pohang earthquake, as well as the earthquake that occurred in Iran on November 12. 50 million won will be sent to Pohang to help in the restoration efforts, as well as to help families with disabilities. 56 million won (approximately $50,900) was delivered to the Embassy of Iran and will be used to help with relief efforts and to help children with disabilities who were injured in the earthquake.

Through the foundation, Lee Young Ae stated, “My heart ached to hear the news of the people of Pohang who have lost their homes due to the earthquake, as well as the people of Iran who have shown their love and support for ‘Jewel in the Palace.’ I wanted to help in any way I could.”

On November 15, a 5.4 magnitude earthquake hit Pohang that resulted in over 50 billion won (approximately $45.4 million) in damages, 76 people injured, and over 1,300 people who have lost their homes.