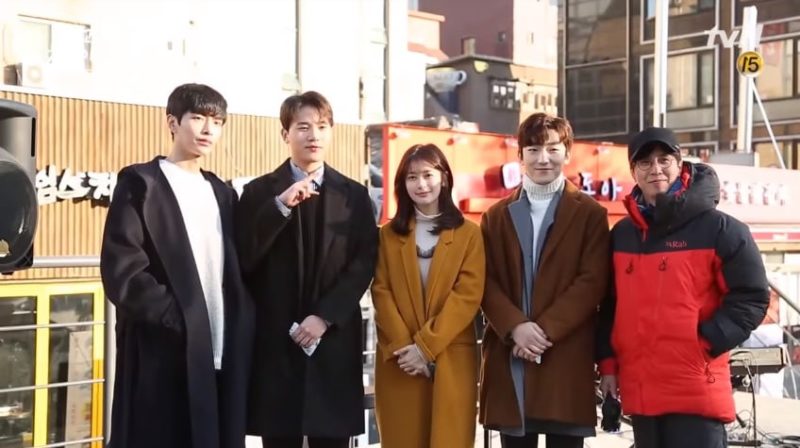 Watch: Lee Min Ki And Jung So Min Enjoy MeloMance’s Serenade In Making Film For “Because This Is My First Life”

tvN has released another making film clip for their Monday-Tuesday drama “Because This Is My First Life”! This time, male duo MeloMance joined Lee Min Ki and Jung So Min to film the scene of the couple’s first date.

MeloMance, who also sang an OST for the drama, sweetly sings in the middle of the street. Jung So Min, who seems to be a fan of the duo, records their live performance and even takes a picture with them. After she thanks them, she gives a thumbs up to the camera and declares, “MeloMance is the best!”

In one scene of the clip, Lee Min Ki and Jung So Min appears in front of MeloMance’s outdoor performance while holding hands. MeloMance asks for a round of applause, and the crowd obediently follows his command. However, the crowd doesn’t stop clapping, and they jokingly call out, “Enough! That’s enough!”

In an interview following their special appearance, MeloMance talks about their filming experience. Vocalist Kim Min Seok says, “We were nervous and happy. It was a new experience, so we filmed with joy. Thank you so much.” Pianist Jung Dong Hwan adds, “I’m really grateful for this experience. My mother watches this drama, too, and I think it’s very good. We’ll continue to do our best. Thank you.”

Also, catch the first episode of “Because This Is My First Life” if you haven’t already!

Jung So Min
Lee Min Ki
MeloMance
Because This Is My First Life
How does this article make you feel?