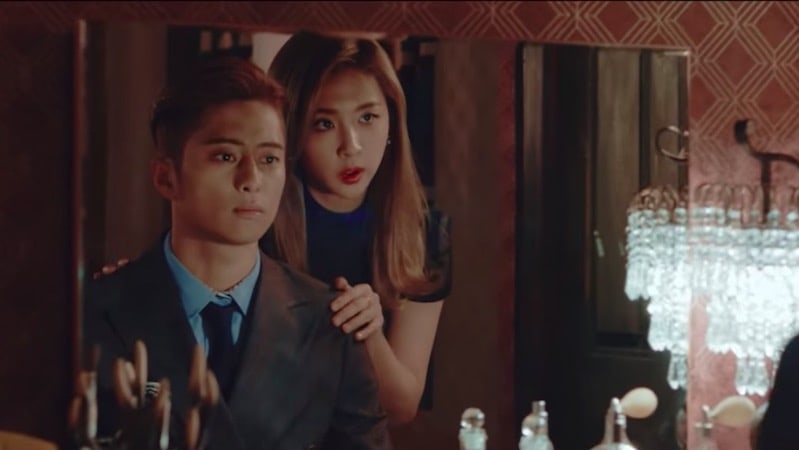 KARD revealed behind-the-scenes stories from the filming of their “You In Me” MV.

Coed group KARD held a showcase for their second mini album “You & Me” on November 21. The showcase included a performance and screening of the music video for their title track “You In Me,” a performance of their new song “Trust Me,” and a question and answer period with the members.

Member Somin discussed the “You In Me” music video, saying, “This music video filming was different from other times. The four of us tried our hands at acting. We watched a lot of movies before filming our music video.” Fellow member Jiwoo commented, “I had to act like a psychopath. I watched the movie ‘Unforgettable,’ which was helpful due to its creepy acting.”

When asked which member caused the most bloopers, Jiwoo shared with a laugh, “It wasn’t when I had to do psychopath acting, but it was so funny having to portray a person in love before that. I would laugh even without making eye contact [with my members]. I got goosebumps and was embarrassed before starting filming.”

J.Seph added “I caused a lot of bloopers as well. It was so difficult having to portray lovers with Jiwoo. While she is a younger friend I like, it was my first time acting in love, so it was hard. [Jiwoo] led well, and I think I was able to complete filming well thanks to her.”

KARD’s new album “You & Me” contains six songs, in addition to three special tracks. Members BM and J.Seph participated in the rap making for all the tracks. The album portrays the unique color of KARD and the songs tell the story of lovers who face a tragic ending due to obsession and jealousy.