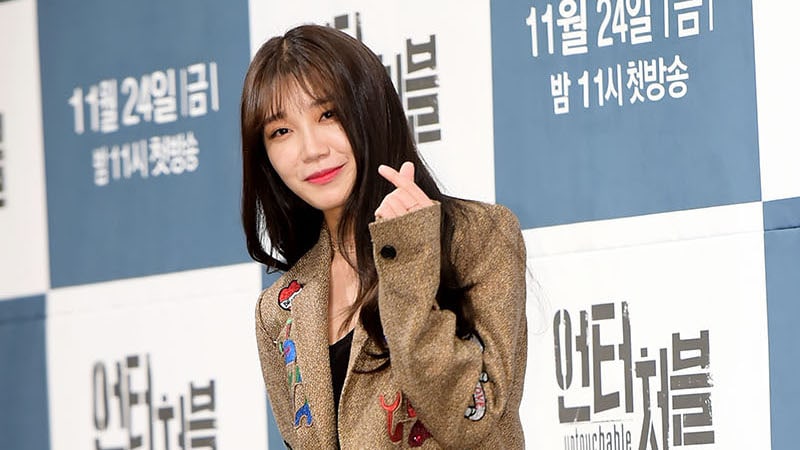 During a press conference held on November 21 for JTBC’s upcoming Friday-Saturday drama, “Untouchable,” Apink’s Jung Eun Ji shared her thoughts on her small screen comeback and her role.

“Untouchable” is about one man (Jin Goo) who will do anything to expose his family’s dark secrets after losing his wife, while his brother (Kim Sung Kyun) has an equally-as-strong conviction to protect those secrets. Jung Eun Ji will be playing the role of Seo Yi Ra, a rookie prosecutor who finds herself swept up in the Jang family affairs.

“I think I was very cautious since this would mark my [drama] comeback after two years. I wondered about how I would portray myself, and I was a little fearful about how I would be able to prepare for the role of a prosecutor,” the singer explained. “However, I came to the conclusion that I could showcase a new aspect of myself [so I chose this drama].”

Jung Eun Ji also talked about what it’s like filming with actors like Jin Goo and Kim Sung Kyun, saying, “I’m having a lot of fun just by watching my seniors act on set. I’m also excited to see how the drama will turn out.” She added, “Something to focus on is how [my character] chases after the truth. I hope that many people who also want to know the truth will watch [this drama].”

Producing director Jo Nam Gook commented, “I like [Jung Eun Ji] just the way she is. I believe her strength is how she doesn’t overly embellish things and expresses everything the way she wants to.”

Apink
Untouchable
XPN
Jun Eun Ji
How does this article make you feel?