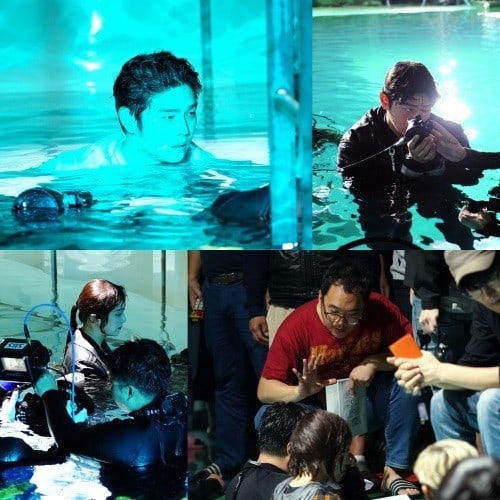 The upcoming SBS drama “Oh, the Mysterious” has released a glimpse at the cast and crew filming one of the show’s intense scenes.

With its premiere date set for next week on November 27, “Oh, The Mysterious” is looking like it will be jam-packed with tension and spectacle. The drama is directed by Shin Kyung Soo, who’s known for his talent at filming acting scenes, and written by Lee Hyun Joo, who is known for her tight and well-organized plots.

They’ve teamed up with a cast of actors including Yoon Kyun Sang, Jung Hye Sung, Jeon Sung Woo, Kang Shin Hyo, and more to present the story of an innocent man (played by Yoon Kyun Sang) who was on death row after being wrongfully convicted of murder. The drama will follow him as he escapes and becomes a fake detective, with Jung Hye Sung playing a stubborn and intelligent detective.

It’s been promised that viewers will get to see plenty of action in the show, from underwater scenes to car chases to his dramatic jailbreak and more.

“Oh, the Mysterious” shared some behind-the-scenes stills on November 24 that show how Yoon Kyun Sang and Jung Hye Sung filmed an underwater action scene that will be part of the first episode. Both the actors and the staff look passionate and focused on their task, and we’ll have to wait and watch the episode to find out what’s going on in the scene.