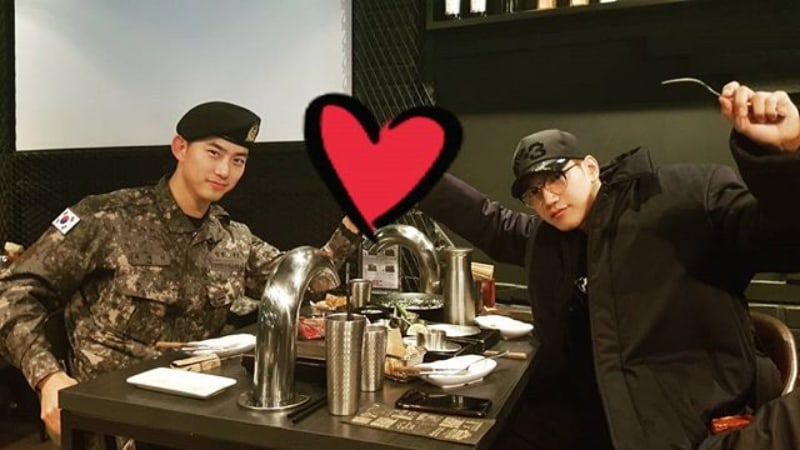 2PM’s Taecyeon Meets Up With Jun.K On His Day Off From The Army

2PM members Taecyeon and Jun.K recently met up for a meal on Taecyeon’s day off from the army!

On November 25, Jun.K posted a photo on Instagram of the two 2PM members sharing a meal with the caption “Our Taecyeon’s first night away [from the military]!”

Taecyeon, who is currently serving in the military, looks dashing in his uniform as he poses with his bandmate. The 2PM member was reported to have been promoted to private and military instruction assistant earlier this month, after receiving praise for his attitude during training.

Taecyeon, who enlisted in September, previously received attention for his determination to enlist as an active-duty soldier. Due to a herniated disc in his lower back, the singer’s health inspection results indicated that he was only fit to serve as a public service worker. However, he chose to undergo back surgery twice in order to enlist as active-duty. Additionally, Taecyeon gave up his status as a Permanent Resident of the United States in order to serve in the Korean military.

The 2PM members, who are known for their close friendship, also supported Taecyeon by showing up to cheer him on at his military training completion ceremony.

2PM
Taecyeon
Jun. K
How does this article make you feel?