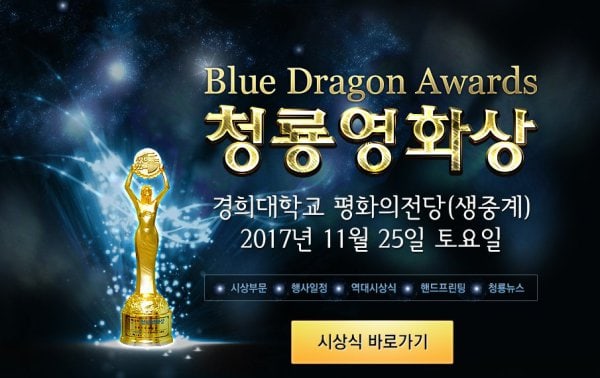 On November 25, the 38th Blue Dragon Film Awards were held at the Kyung Hee University Grand Peace Palace to honor some of the best films and filmmakers of 2017.

The ceremony, which was emceed by Kim Hye Soo and Lee Sun Gyun, got off to an unfortunate start when photographers decided to boycott the red carpet. Because of the heavy rain, reporters had asked permission to take photos inside instead of the usual outdoors red carpet but were denied.

Some notable winners included EXO’s D.O. for Best New Actor. He was unable to accept the award in person due to his concert but his former co-star and close friend Jo In Sung accepted it in his place. Jo In Sung himself took home a Popular Star Award for his role in “The King.” Later D.O. arrived at the ceremony just in time to present the Best Film award with Shin Ha Kyun and gave thanks for his own award.

Big winners of the night included “I Can Speak,” which picked up both a Popular Star Award and Best Leading Actress award for veteran actress Na Moon Hee as well as the Best Director Award, which was presented by American actor Steven Yeun. “A Taxi Driver” was also well-beloved at the awards, winning Best Film, Audience Choice Award, Best Music, and Best Leading Actor for Song Kang Ho.

Audience Choice Award for Most Popular Film – “A Taxi Driver”