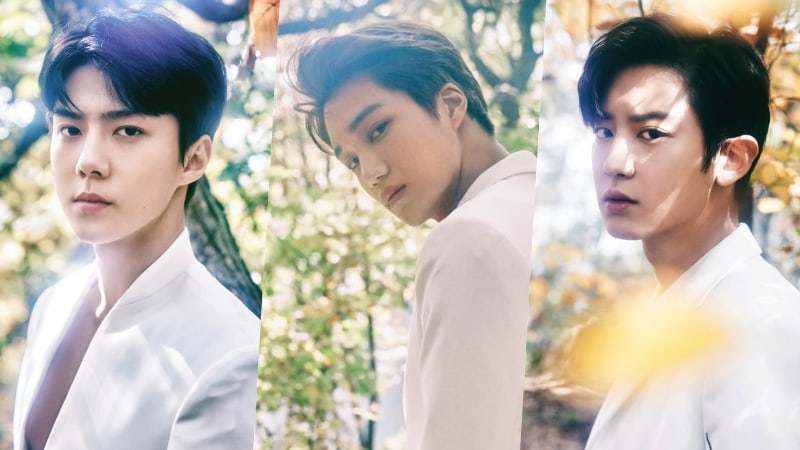 EXO’s Sehun, Kai, And Chanyeol Open Up About Their Self-Created Solo Stages At Recent Concert

During a press conference ahead of their concert on November 26, EXO shared more details about some of the special stages they prepared for their current concert series, “EXO PLANET #4 – The EℓyXiOn.”

In addition to old favorites and newer songs, the members each showcased a solo (or duo) performance of some sort. Notably, Kai, Chanyeol, and Sehun all had a hand in creating their stages.

As one of the four choreographers of his dance solo to a new song title “I See You,” Kai shared, “The videos shown during the concert are [connected] like a movie…and we appear to be searching for something. I wanted to portray this feeling. I wanted to captivate with my interpretation and the use of various stage equipment.”

See Also: EXO Reveals Their Future Goal As A Group

For his solo performance, Chanyeol wrote and produced a new track, “Hand” (literal translation). He revealed, “I’ve never gathered and organized my thoughts into a song while promoting, so I tried to [do so] with this song. It’s a song that encompasses how I felt in the past, and my state of mind about [my future]. I thought of my members and fans when I was writing the lyrics and when I was singing. It is filled with my conviction.”

Sehun prepared a singing and dancing performance for this concert, co-producing the track itself and penning its lyrics as well.

“My solo is called ‘GO.’ I wrote the lyrics while thinking about my members and fans. You may feel that the lyrics are very broad and abstract,” Sehun explained. “While I have my own meaning [behind the song], I think it can be interpreted in many ways. I personally think it’s good to interpret the song in your own way. It’s no fun if I just tell you my intention, so please listen to the song and formulate your own explanation however you want.”

He also briefly touched on revealing his abs during his performance, saying, “I just wanted to keep my promise that I made at our [previous] encore concert.”

See Also: EXO Talks About BTS And Wanna One During Concert Press Conference

The next leg of “EXO PLANET #4 – The EℓyXiOn” is set to take place in Fukuoka, Japan on December 22-24, before continuing in 2018. EXO will also be releasing a winter special album in December, and a Japanese full album in January 2018.

EXO
Kai
Sehun
Chanyeol
How does this article make you feel?