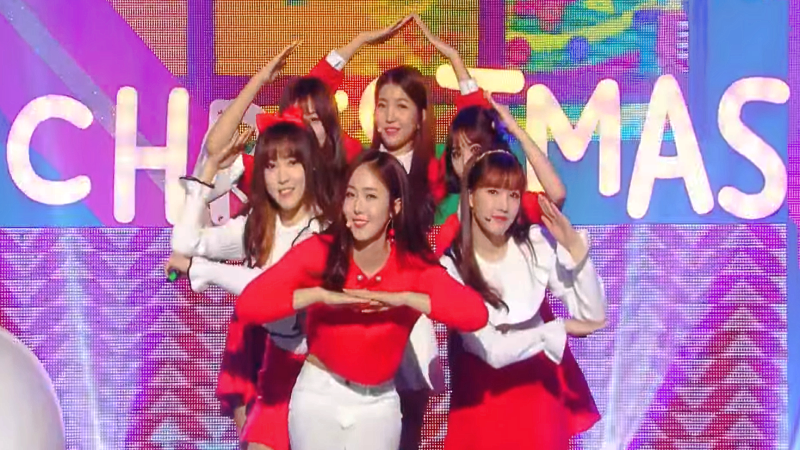 It’s officially the holiday season — time for twinkling lights, prettily wrapped presents, and of course, Christmas music! This time of year just wouldn’t be the same without those classic Christmas tunes that get everyone around the world excited, including K-pop idols! From traditional Christmas songs to pop Christmas classics, your favorite K-pop stars have got you covered. So, sing along and check out these 14 amazing covers of classic Christmas songs that are sure to fill you with holiday (and fangirl/fanboy) spirit!

Hyorin, VIXX, and Dickpunks teamed up in 2015 for this awesome performance of the Christmas staple, “All I Want for Christmas Is You.” The unique and fun arrangement, live instruments, and powerful vocals all make this a stage you’ll want to watch all Christmas long.

No Christmas would be complete without the catchy and fun tune of “Feliz Navidad.” In 2016, GFRIEND made this song their own by adding a cute, lovable dance and their sweet-as-a-candy-cane vocals. It’s one you’ll definitely be singing along with.

Fans got a special Christmas surprise from INFINITE in 2015 when they sang a gorgeous arrangement of “Joy to the World” as a pre-cursor to their song “Love Letter” on “Music Bank.” With rich harmonies, warm visuals, and sweet voices, this cover will have you melting faster than whipped cream in hot chocolate.

In 2015, the cute and talented girls of Apink performed a refreshing version of “Last Christmas.” The adorable set, festive outfits, and fun dance all make this performance a perfect addition to anyone’s holidays.

In some parts of the world, chilly temperatures and blizzards are a common part of the Christmas season. But no matter what the weather is like where you are, you can warm up with Ailee & Sung Si Kyung’s take on the classic Christmas duet, “Baby, It’s Cold Outside.”

Their first Christmas after debut in 2008, SHINee teamed up with KARA for a special holiday performance of “Jingle Bell Rock.” It’s always fun to watch different artists collaborate, and seeing the cute and refreshing KARA with the young and talented SHINee is a Christmas gift that keeps on giving all these years later.

As one of the rare male-female duos on the K-pop scene, Akdong Musician has a fun, unique style to their music. They added their flare to the classic Christmas song “Winter Wonderland” in 2014, and their version is sure to become one of your favorites.

Super Junior’s vocal sub-unit, Super Junior K.R.Y., held a special Christmas tour in Japan in 2012 where they performed many beloved Christmas songs. But their rich and lovely voices particularly shone during this wonderful version of “Silent Night.” It’s a performance that will give you the good kind of chills this Christmas season.

10. “Have Yourself a Merry Little Christmas” – Wendy

Red Velvet’s Wendy has a powerful and captivating voice that brings new life to the old Christmas favorite, “Have Yourself a Merry Little Christmas.” With a smooth and jazzy arrangement, this rendition is perfect for a cozy night by the fire with someone special.

Nothing can beat a live orchestra, an exciting song, and the powerhouse vocals of Davichi. They sang this fantastic arrangement during Christmas time in 2010, and it’s a powerful performance that will have you feeling holly and jolly in no time.

It’s amazing how just Ailee, a mic, and a piano can create such a magical musical experience. This version was released in 2012 as part of a tribute project to David Foster, the song’s original composer. Years later, Ailee’s soulful, hopeful take on this Christmas classic is still a message everyone in the world can appreciate, especially at this time of year.

As part of the aforementioned “Girls’ Generation Christmas Fairy Tale” concert, Taeyeon gave a stunning performance of the Christmas song, “O Holy Night.” Her voice is beautiful and clear, almost angelic, and will give you all the feels this Christmas season.

It takes truly talented artists to sing acapella (without instruments), and BTOB’s vocal line does it flawlessly in their versions of “White Christmas” and “Deck the Halls.” With tight harmonies and clear voices, this jaw-dropping practice performance will make you hope BTOB appears under your tree on Christmas morning singing just like this.

Which cover was your favorite, Soompiers? Share your thoughts in the comments down below!

erinunnie first discovered the joys of Korean entertainment during a magical summer in 2010 and has never looked back. Her current favorites include Super Junior, GOT7, SEVENTEEN, and any Korean dramas she can get her hands on. In her spare time she enjoys writing, reading, playing the piano, and singing. Connect with Erin on Twitter to keep up with her latest obsessions!