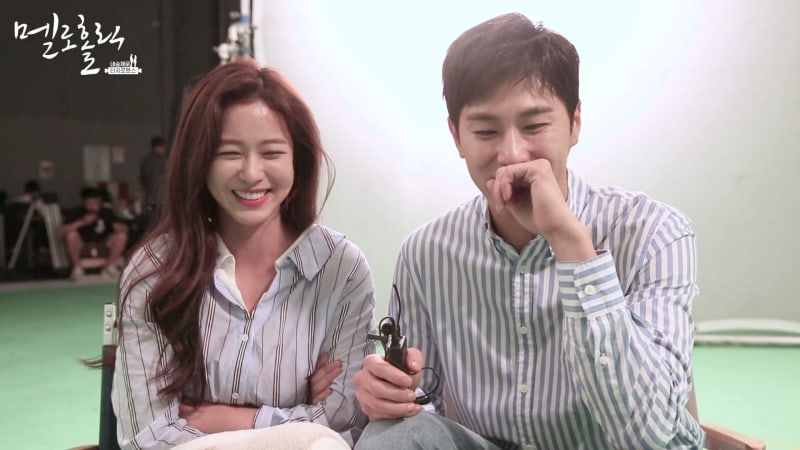 “Melo Holic” is a drama about a psychology student named Yoo Eun Ho (Yunho), who has the supernatural ability to read minds, and a girl named Han Joo Ri/Han Ye Ri (Kyung Soo Jin), who has a split personality. The drama tells their young, fun, and adventurous love story.

The clip begins with the first scene of the drama, where Yoo Eun Ho confesses his love on a rooftop. While watching this scene, Yunho said, “To be honest, [the weather when filming] this scene was so hot and I was higher up than I expected, so I was really scared. Also, [I kept pulling my pants up] because if you look closely, my underwear kept showing.” After hearing Yunho’s commentary, Kyung Soo Jin complimented his acting and said these actions added another touch to his character on-screen.

Yunho then revealed the hardships of filming the attack scene in the rain. He had to film for five hours in the rain and lay on the cold ground. Despite the cold weather, however, Yunho expressed that it was actually a warm atmosphere on set because Kyung Soo Jin gave him hot packs.

Because of their on-screen characters, Yunho had to act scared while riding the ride at the amusement park while Kyung Soo Jin acted as if she was having fun. However, Yunho revealed that it was the complete opposite in real life. Yunho actually enjoys riding rides while Kyung Soo Jin is scared of them. He praised her professionalism and added, “She was so scared, but when she started filming, she would snap right back into character.”

The on-screen couple then watched their romantic scenes together and joked about how many times they had to kiss on camera. The actors concluded the behind-the-scenes commentary clip by talking about how hard the staff and directors worked to create a great drama.

Watch the behind-the-scenes commentary video below!

If you haven’t already, check out Yunho and Kyung Soo Jin in the first episode of “Melo Holic” below!

Melo Holic
How does this article make you feel?