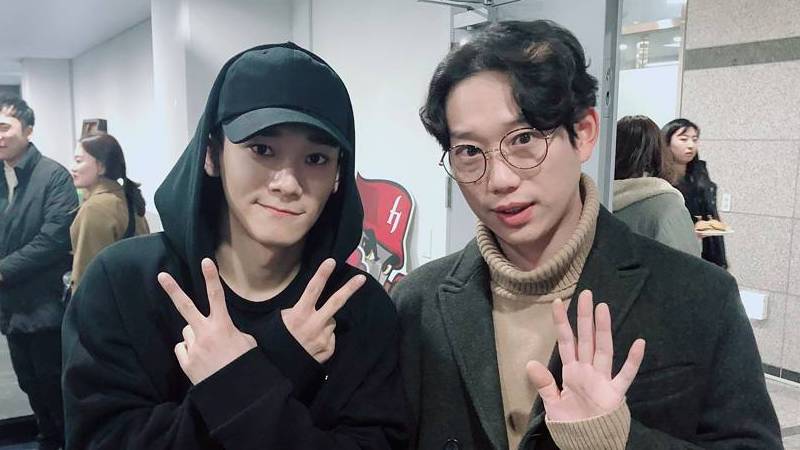 10cm’s Kwon Jung Yeol made an appearance on the November 29 broadcast of SBS Love FM’s “Kim Chang Ryul’s Old School,” where he talked about working with EXO’s Chen.

The two singers previously worked together on a SM STATION 2 track, “Bye Babe,” which was co-produced by Kwon Jung Yeol and features lyrics written by both the 10cm member and Chen.

Kwon Jung Yeol complimented Chen and commented, “His face was so small that I was surprised while we were working together. While making the lyrics, I had high expectations but Chen’s musical sense was even better than I expected, so I was happy. I realized there was a reason EXO is who they are.”

He also mentioned that he attended EXO’s concert just a few days ago, and stated, “It was so cool. I dreamt of being an idol as a kid, but when I saw EXO’s performance, I felt I shouldn’t even be there.” DJ Kim Chang Ryul jokingly responded, “Aren’t you the idol of the indie scene?”

One of the listeners asked Kwon Jung Yeol, “Are there any other artists you want to collaborate with?” The singer replied, “It seems that if you make a promise on this program it always happens. I’ve made a verbal promise to collaborate with IU.”

He was also asked if he wanted to reappear on an “Infinite Challenge” song festival, to which he answered, “Of course I want to participate again. I worked with Haha last time but I’d like to work with Park Myung Soo next time, and create an EDM-acoustic collaboration.”

Kwon Jung Yeol also revealed that after getting married, he heard that he looked a lot better. On his newlywed life, he stated, “It’s true that married life is great. But right before I got married, I had suddenly gained a lot of weight. I think that made me look older, and now I’m back to normal [which is why I hear such things].”

The singer then commented on his upcoming solo concert, saying, “I promise I will appear often. I hope I can greet everyone who watched [this broadcast] today at the 10cm concert.”