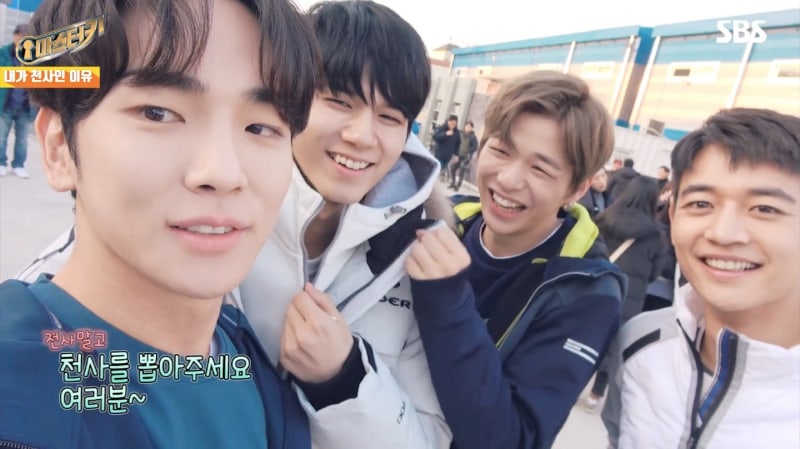 Members of SHINee, Wanna One, and Oh My Girl all profess their innocence in a newly released teaser for “Master Key”!

In the latest preview for the show’s upcoming episode, SHINee’s Key and Wanna One’s Kang Daniel both declare that they’re the angel. As proof, Kang Daniel puts forth that his blood type is A for Angel. In response, Key laughs and says teasingly, “You’re really shameless.”

They’re soon joined by their respective group members Choi Minho and Ong Sung Woo, both of whom also insist that they’re the angel this week. Kang Daniel accuses Ong Sung Woo of being the devil, to which his bandmate replies, “I’m the angel, because my personality is angelic. I’m very kind.”

SHINee’s Choi Minho takes a different approach, imploring viewers to look into his eyes to determine his innocence. “It’s me who’s the angel,” he claims. “Look at these eyes!”

Ong Sung Woo goes on, “Ever since I was little, I was incapable of doing anything bad.” Not to be outdone, Key points out, “I’ve never been the angel before [on the show]. That’s why I’m the angel this time.”

The video also features Oh My Girl’s leader Hyojung, who expresses her excitement over making her first appearance on the show. She claims to be the angel as well, saying, “I’m incapable of lying.”

Who do you think is telling the truth?

The next episode of “Master Key” will air on Saturday, December 2 at 6:10 p.m. KST. In the meantime, watch the full clip below!